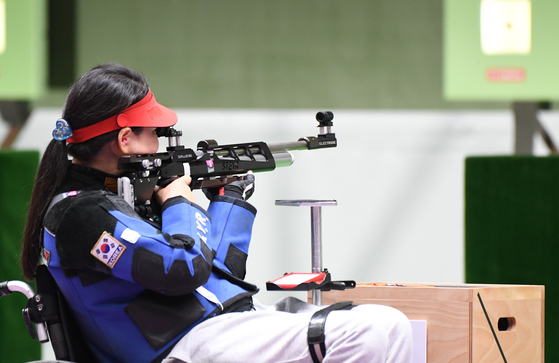 Lee Yun-ri shoots during the women's 10-meter standing class one final at the Asaka Shooting Range in Tokyo on Monday. She finished fifth in the event. [NEWS1]

Lee was in fifth after the first five shots but dropped down to the bottom of the standings after shooting a surprisingly low 41 over the next five shots.

Then, in the last elimination stage, she shot a 49.5 in the first five then a 51.8 in the next five, the best of the finalists in that series. That 51.8 put her up at seventh, but wasn't enough to keep her in the contest.

The 46-year-old veteran became a four-time Paralympian in Tokyo. She won a gold medal on her first try on the big stage, at the women's sport rifle 3x20 sport class one at the 2008 Beijing Games. At the 2016 Rio Games, she won the bronze medal for the women's 50-meter rifle three positions class one.

In sport class one, athletes can support the full weight of the rifle themselves. As the rifle is held with both hands, athletes in this sport class have an impairment in their legs due to amputations or paraplegia. Some athletes will compete in a wheelchair or shooting chair, while others will compete in a standing position. Lee competes in a wheelchair due to a spinal cord injury from a traffic accident in 1996.

However, the three different positions are adjusted for those competing in a seated position like Lee. They remain in wheelchairs for all three but in the prone position, they are given larger tables than the kneeling position for more stability. In the last standing position, athletes in wheelchairs detach their tables and those standing may use a stand for support.

On Monday, Lee finished fifth in the women's 10-meter standing class one.

Despite going home without a medal, competing in four Paralympics in a row and still reaching the finals is a great achievement in itself.