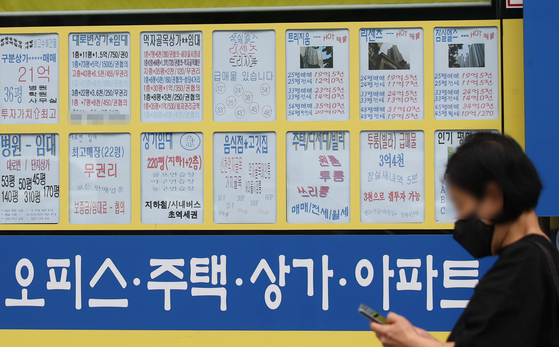 A real estate agency in Songpa, southern Seoul, offers a 108.9 square-meter apartment for jeonse at 1.3 to 1.4 billion won in August. Jeonse prices continued to rise due to fewer jeonse offerings since the bills designed to protect tenants were pushed through in July 2020. [YONHAP]

Tenant protection bills pushed through in July 2020 have done little for the people they were drafted to help as jeonse prices have jumped due to the lack of available apartments.

The situation is set to worsen starting next summer once contracts already mandatorily extended expire and price protections, which limit increases to 5 percent, end.

According to a report by KB Kookmin Bank, for the first time, the median jeonse price in Gangbuk, north of the Han River, exceeded 500 million won ($431,700). Gangbuk housing prices are normally lower than those south of the river, in the area known as Gangnam.

In August, the median jeonse price in Gangbuk was 504.3 million won. That’s 33 percent higher than the year earlier period, when the median price was 378.6 million won.

Throughout most of the Moon Jae-in administration, the median jeonse price in Gangbuk has remained in the 300-million-won range. The recent spike started when the tenant protection laws were pushed through in July 2020.

The median jeonse price in September 2020, which is a month after the new bills were implemented, exceeded 400 million won for the first time.

The KB Kookmin Bank’s report noted that the rising jeonse price is largely due to the shortage of jeonse units available.

Under the three tenant-protection bills, jeonse contracts are automatically extended once, jeonse prices cannot be increased by more than 5 percent at the time of automatic renewal and all such contracts have to be reported to the local government.

The first two were implemented immediately, while the third was given a grace period of one year.

Market experts at the time warned that such bills will result in a shortage of available jeonse flats.

Increases in property taxes only added to the problem as they encouraged landlords to switch from jeonse to monthly rent, which generate more cashflow to pay off the increased taxes.

The larger problem is when the renewed contracts expire next year, which will allow landlords to raise jeonse price beyond the 5-percent limit.

“The government will come up with measures that will solve such double-standard prices in the jeonse market by the end of the year,” Hong said.

The Finance Minister added that stabilizing the housing market is crucial in solving the problem.

“As such, the government will continue to work fast in executing housing supply plans that have been announced,” Hong said.

Despite the finance minister’s assurances, there are doubts in the market as to whether the situation will stabilize anytime soon, especially since the newly supplied apartments through New Towns will only be available starting 2026.

Real estate information agency Budongsan 114 estimates that next year the number of available apartments in Seoul will be 33.7 percent fewer than this year’s at 20,463 units.

The shortage is continuing to drive up prices, undermining the government’s efforts, such as warning people prices could fall and leaning on financial institutions to restrict credit.

Demand for apartments in the greater Seoul area was led by people in their 30s.

According to the Korea Real Estate Board, in the first half, 28.4 percent of apartments purchased in Gyeonggi were bought by those in their 30s, while the corresponding number in Seoul was 36.5 percent.

The Bank of Korea recently joined the government in its efforts as it tightened monetary policy by raising the key interest rate for the first time in 15 months citing concerns of ever-expanding household debt and the increasing pressure of inflation.

Some experts say the government should consider suspending the bills.

“It would be more realistic if the government suspends the housing bills and takes action according to analysis made through the information on housing transactions made through the required reporting on rent contracts,” said Huh Yoon-kyung, head of the economic and finance research department at the Construction and Economy Research Institute of Korea.