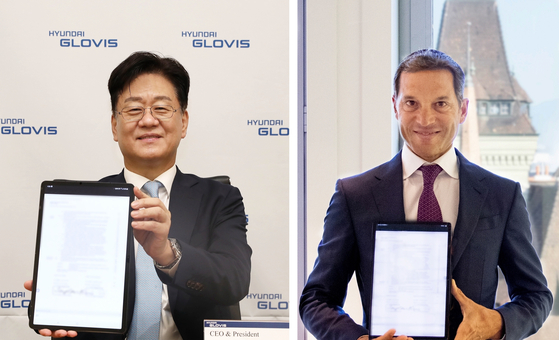 Kim Jung-hoon, CEO of Hyundai Glovis, left, and Jose Maria Larocca, executive director and co-head of oil trading at Trafigura, pose for photos on Thursday after signing a 10-year gas shipping contract in their offices in Korea and Switzerland. [HYUNDAI GLOVIS]


Logistics company Hyundai Glovis will start shipping liquefied petroleum gas (LPG) and ammonia by sea from 2024 thanks to a transportation contract it has signed with Swiss commodity trading company Trafigura, the company said Sunday.

According to Hyundai Glovis, it signed a 10-year contract with Trafigura on Thursday to transport ammonia and LPG together starting from 2024.

Contrary to existing LPG carriers that can only transport LPG, the new VLGCs will be built with special materials to also house ammonia. There are currently less than 20 VLGCs around the world, according to Hyundai Glovis.

Transporting ammonia and LPG has more implications than simply expanding the company’s portfolio, according to Hyundai Glovis.

Ammonia is the best material from which to extract hydrogen, according to Hyundai Glovis, for which demand is increasing worldwide due to the development and usage of hydrogen cars and other eco-friendly machines. Ammonia is currently used for fertilizers and petrochemicals and transported on ships with a storage volume lower than 35,000 square meters.

Ammonia also has the potential to be used as zero-carbon-emissions fuel. The VLGCs will be designed to allow their engines to be changed in the future when the technology to use ammonia as fuel is developed.

The shipment contract will allow Hyundai Glovis to make and manage a global hydrogen supply chain, according to the company, allowing it to handle the increasing demand for hydrogen.

“We will now prove our competitive edge in the global gas transportation market through the long-term contract with a global commodity shipping company,” Hyundai Glovis said in a statement.

“We expect that it will also help with accelerating the establishment of an eco-friendly hydrogen infrastructure. We will lead the global hydrogen shipping market by also shipping hydrogen in the future.”