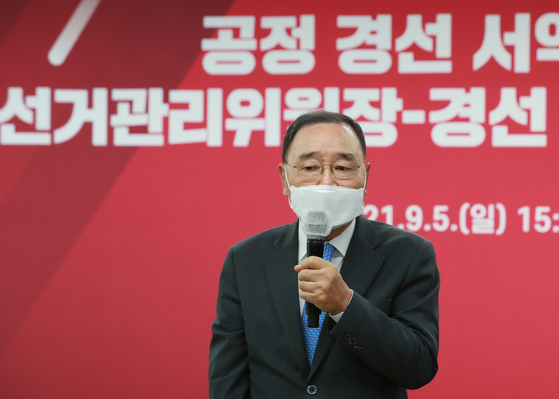 
The election commissioner for the main opposition People Power Party (PPP) decided to maintain his post after earlier offering to step down amid a dispute over the party's push to revise rules for the primary race ahead of next year's presidential election.

Chung Hong-won decided to stay put as election commissioner after he met with PPP Chairman Lee Jun-seok, according to the party leader.

"Chung delivered his concern that his authority could not stand, and I persuaded him [not to step down]," Lee told Yonhap News Agency. "I promised to provide all possible support in order to help him work without any inconveniences."

Chung expressed hope for full cooperation from presidential contenders in carrying out his obligation and urged them to respect whatever decision will be made on the party's election rules to pick the standard-bearer for the March presidential election.

Chung earlier offered to resign after he got into trouble with some of the party's presidential contenders over revising the election rules in a way that prevents nonparty members from intentionally choosing a candidate who could increase the rival party's chances of winning the March 9 presidential election.

Party members have been divided over the move.

Among the PPP's presidential contenders, Yoon Seok-youl, a former prosecutor general, was in favor of the introduction, while Rep. Hong Joon-pyo and Yoo Seong-min, a former lawmaker, were against it.

The party's election commission was to hold a meeting in the afternoon to come to a conclusion on the dispute.