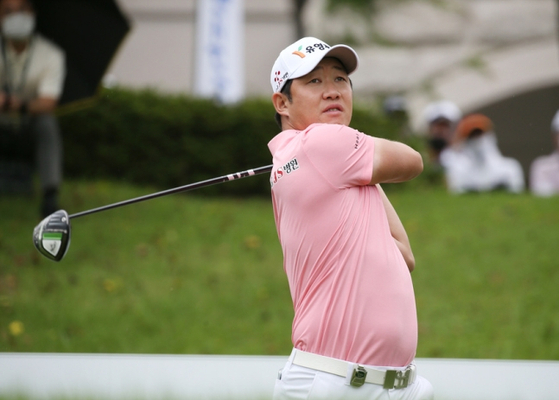 Kang's victory came after a playoff, by the narrowest of margins. At the end of the regular 18 holes, his score stood at 19-under-par, 269 — tied with Ok Tae-hoon, an up-and-coming golfer 15 years his junior.

On the day, Ok kept things tense until the very end, chasing Kang until the final hole of the final round. With only a single stroke separating them at the 18th hole, Ok dramatically grabbed a birdie from 8.2 yards out with a wedge shot to send the game to a playoff.

On the playoff hole, however, Kang's veteran experience came through. When he landed his second shot far closer to the hole than Ok's, Ok looked to be overcome by nerves and ended up putting way too short. Kang pounced on the opportunity, completing a birdie to end the tournament.

Ok will be disheartened about having slipped up at such a crucial moment, but his runner-up finish still marks a new career high. His previous best finish was placing third at the SK Telecom Open this year.

At the Bizplay-Electronics Times Open, Kang played a good game from day one, finishing at seven-under-par, 65 — just two strokes off the top of the leaderboard. On the second day, he cut only four strokes but still remained two off the top and tied for second.

On the third day, he cut another five strokes to bring his score to 16-under-par, 200, bouncing to the top of the pack, two strokes ahead of Ok. The final round, in which he cut three strokes, was Kang's worst performance, but he made up for that and more with his calm display to win the playoff.

Kang's 11th trophy makes him the most decorated active player on the KPGA Tour. His affinity with Naju is also becoming a point of interest — three of his 11 wins were achieved in the city.

The Bizplay-Electronics Times Open, the 11th event of this year's Tour, is one of the newest KPGA tournaments, as it was only established last year. Last year's champion, Wonjoon Lee of Australia, finished tied for 28th with a score of seven-under-par, 281.

The KPGA returns on Thursday with the 37th Shinhan Donghae Open at Bear's Best CheongNa Golf Club in Cheongna, Incheon.