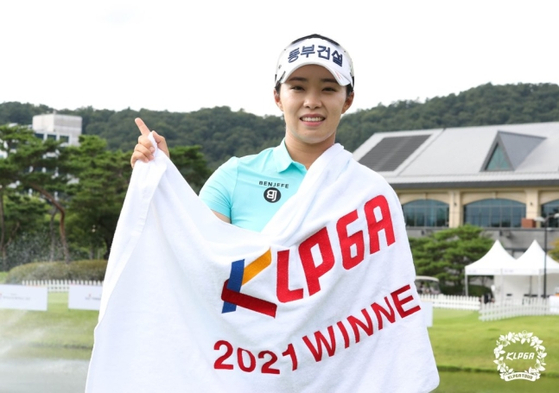 
Kim Su-ji won her first-ever KLPGA trophy at the KG-Edaily Ladies Open at Sunning Point Country Club in Yongin, Gyeonggi, on Sunday. She was awarded 126 million won ($109,000) in prize money.

Park Min-ji, who is leading the Tour in both point total and prize money this year and had been touted as the tournament favorite, finished tied for sixth place with a score of 10-under-par, 206.

On the final day of the tournament, Kim made five birdies and one bogey for four-under-par, 68, bringing her final score to 15-under-par, 201. This was two strokes better than Lee So-mi, who finished in second place with 13-under-par, 203. Three players tied for third with 11-under-par.

It had been made clear early on in the event that Kim might at last end her long hunt for a trophy.

On the first day, Kim hit nine-under-par, 63, to set a personal record and take a sole lead by a margin of three strokes. She held onto first place throughout the second and third rounds as well, achieving a rare wire-to-wire victory.

This Open was the 115th tournament of Kim's career. Only eight more players in the Tour's history have played in more events before finally taking home their first trophy.

Prior to this win, the 24-year-old had never even breached the top 20 in the KLPGA money rankings since her debut in 2017. Last year, she fell to 84th place in the ranking and lost her spot on the Tour. She had to play through a seeding qualifier just to return to the top flight of play for 2021.

In the post-tournament interview, Kim said the victory experience was "nothing like" what she had imagined, and that it felt like her mind was blank because she was so overwhelmed by it all. But now that she knows what it's like, the newest champion on the block is ready to gun for another trophy.

"Now that I've won one, I feel like I could win a second," she said.