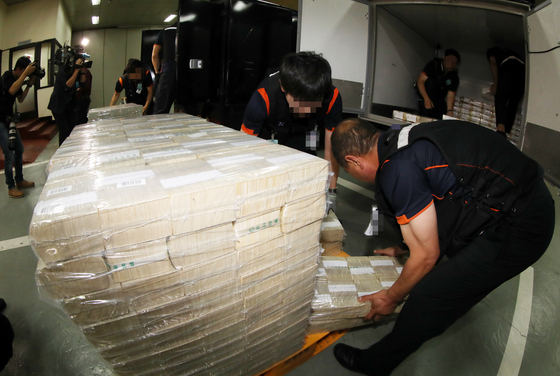 Fresh new cash being loaded on trucks on the basement of Baank of Korea in 2018 ahead of Chuseok holidays that year to be deliverd to banks. Many people during Chuseok takes out fresh new cash to give as bonuses or to allowance to niece and nephews during one of the two most celebrated holidays. However, this year due to the Covid-19 impact on the economy, 13 percent of SMEs said they won't be able to offer bonuses to employees. [YONHAP]

As Covid-19 situation continues to hammer the economy, many small businesses can't give bonuses for the Chuseok holiday.

More than half of small- and medium-sized enterprises (SMEs) say they are struggling, a stark contrast to major exporters like Samsung Electronics, which have been enjoying record-breaking performances despite the global pandemic.

According to the Korea Federation of SMEs (Kbiz) on Monday, 13.1 percent of 900 companies that participated in a survey said they won’t be able to pay Chuseok bonuses to their employees due to their dire situations.

Chuseok is one of two big national holidays in which relatives gather to exchange gifts.

Among the 900 companies, 21.3 percent said they hadn’t decided yet on bonuses, while 31.3 percent said bonuses are already included in the employees’ annual salaries, and they have no plans to offer additional bonuses.

If you assume the undecided companies are unlikely to offer bonuses, the companies that have no additional bonus plans amount to 66 percent.

Only 34.2 percent were certain to give bonuses this year, a sharp drop from 47.3 percent in 2020. The size of bonuses will be around the same amount as last year.

More than half or 55.8 percent of SMEs said they were in dire financial states.

Manufacturers had a higher ratio of companies struggling, 58.4 percent, than SMEs in service industries, 51.9 percent.

Companies whose main markets are domestic were in generally worse shape. Some 58.6 percent of them said they were struggling with shrinking revenue and profits and having difficulty getting loans compared to 42.1 percent of exporters.

Some 60.2 percent of companies located outside of the greater Seoul area - Seoul, Gyeonggi and Incheon - said they were struggling while only 51.4 percent located near the captial said so.

Among all companies, 78.5 percent said their businesses have been impacted by dropping revenue and profits. Increasing raw material prices was a problem for 53 percent and rising labor costs for 25.7 percent.

Some 21.3 percent of all companies said they were struggling to collect payment owed for their services or products.

A full 96.4 percent of respondents blamed Covid-19 for their situations.

However, 91.8 percent of the companies said they are allowing employees to take breaks during the holiday.

The official holiday is three days between Sept. 20 through Sept 22. But when adding the two weekends, the holiday can be extended to five days.

“SMEs are struggling more than ever due to the impact of Covid-19 on their revenues as well as rising raw material prices and labor costs,” said Choo Moon-gab, a senior official on economic policy at Kbiz.