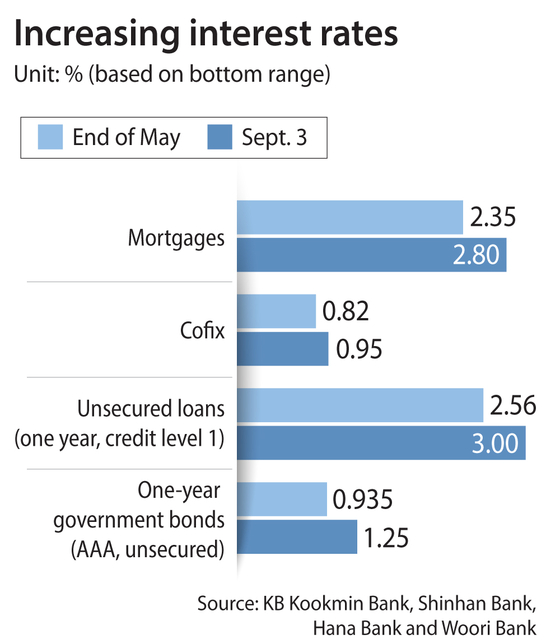 Interest rates have been on a continuous rise throughout the year, and borrowers may have to brace themselves for higher costs of borrowing and tighter loan regulations.

Another possible rate hike could also come by the Bank of Korea (BOK).

Interest rates on unsecured loans for people with the highest credit of level 1 also rose, ranging between 3 percent to 4.05 percent. Both bottom and upper range figures were up 0.43 percentage points since the end of May.

A rising cost of fund index (Cofix) — a benchmark rate used in setting mortgages’ floating interest rates  has been pushing up mortgage rates even before the BOK rate hike, but many say the financial authorities' regulations on loans played a huge role in pulling up interest rates. The Cofix rose 0.13 percentage points from April to July.


“The best way for banks to control the demand for deposits and loans is to adjust interest rates,” said an official for a local bank. “Banks have been refraining from aggressively lending since the end of last year and are controlling demand by raising their spread.”

Banks determine interest rates on loans by deciding on a spread, a profit margin, above the base interest rate. The interest rate is further adjusted based on a borrower's banking and credit history.

Interest rates on loans are expected rise even more. NongHyup Bank decided to temporarily stop issuing mortgages until the end of November, following financial authorities’ attempts to tame the growth of household debt. Shinhan Bank announced it will increase its spread for mortgages by 0.2 percentage point starting Monday.

The recent BOK rate hike has been pulling up mortgage interest rates, and they could rise higher.

"We have raised the rates by 25 basis points, but the rate is still accommodative," BOK Gov. Lee Ju-yeol said on Aug. 26, following the rate hike announcement. "The central bank plans to gradually adjust the degree of accommodation in our policies that have been much expanded in the past."

Loan shark vig capped at 6 percent a year by government