Kospi closed Monday slightly up, finishing the day at 3,203.33

Kospi closed Monday slightly up, finishing the day at 3,203.33 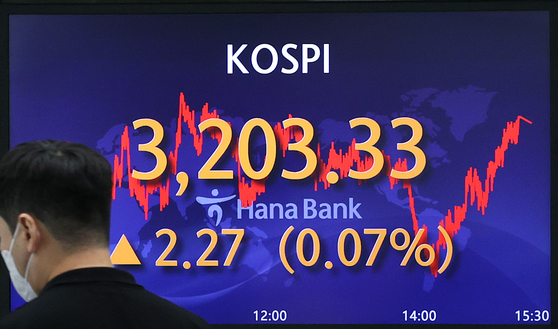 A screen in Hana Bank's trading room in central Seoul shows the Kospi closing at 3,203.33 points on Monday, up 2.27 points, or 0.07 percent, from the previous trading day. [YONHAP]


Stocks edged up after choppy trading Monday as investors seek to digest weaker-than-expected August jobs data in the United States. The won rose against the dollar.

The Kospi fluctuated in a tight range as investors weighed chances of a delay in the Fed's tapering timeline.

New jobs in the U.S. came to a seven-month low in August amid the spread of variant cases, raising expectations the Federal Reserve would not rush tapering its asset buying plans in the September meeting.

"Market participants seem to be interpreting the U.S. jobs data in different ways and had the Kospi boxed in a tight range," said HI Investment & Securities analyst Park Sang-hyun.

The local currency closed at 1,156.5 won against the dollar, down 0.5 won from the previous session's close.