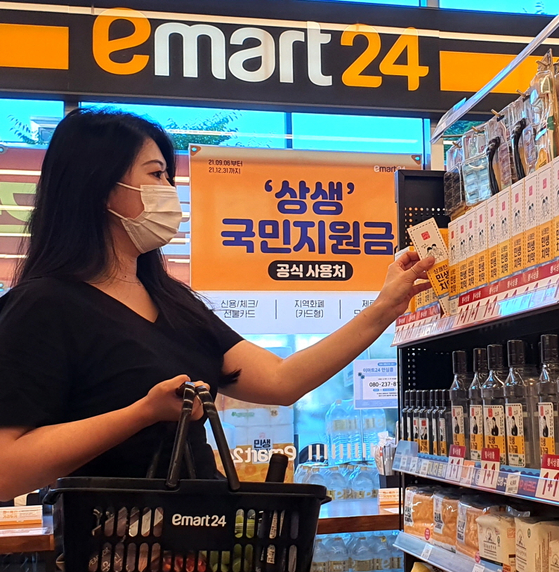 A model shops at an Emart24 store, where a sign that promotes stimulus check spending is hung. [EMART24]


Korean households are about to get free money from the government in the form of 250,000 won ($214) emergency relief grants -- and retailers are hoping to pull a lot of it into their cash registers.

Convenience stores are expanding their range of products, while discount marts -- where the relief grants can not be spent -- are offering bigger promotions to attract customers in the buying mood.

Applications began Monday for the fifth round of stimulus checks. Of the five rounds of stimulus checks, only one before and this one went to most korean households(Three rounds were targeted at small businesses.)

The grants can be spent at convenience stores, small supermarkets and franchise bakeries that are not directly run by a conglomerate.

They can’t be used at the big discount marts, department stores or online malls, which includes Coupang and food delivery apps like Baedal Minjok.

GS25 is expanding the types of household appliances it sells from 60 to 90, which includes Apple’s AirPods Pro and Samsung Electronics’ QLED television. Premium fruit like shine muscat grapes are also available.

Chuseok is a Korean harvest festival that falls on Sept. 21 this year.

GS Retail is also offering buy-two-get-one-free promotions of beef sets that cost between 59,900 won and 89,900 won each through September.

“We are actively promoting that the stimulus checks can be used at GS25, considering that 60 percent of the amount is spent by an individual in a month the checks are given,” said a spokesperson for GS25.

GS Retail said sales of small household appliances jumped 446.3 percent for a month after the first round of stimulus checks in May 2020 compared to the same period the previous year. Meat sales rose 238.2 percent.

The 7-Eleven chain is offering discounts on wine and prepackaged meals depending on the type of a credit card customers use, while Emart24 is temporarily selling premium fruit, including mangoes, starting Thursday.

Emart24 is also offering a 1,000-won discount coupon to some people who spend their stimulus checks at the stores.

Big discount marts, on the flip side, are complaining that their sales are being affected by people not being able to spend the grants in their stores.

“We have been excluded for two consecutive years,” a spokesperson for a discount mart chain told the JoongAng Ilbo. “Sales have been cut a lot since May last year” as people chose alternative shopping channels where the checks can be spent.

Sales at convenience stores in the first half of this year were up 6.2 percent compared to the same period last year, according to data by Ministry of Trade, Industry and Energy released last month. Sales growth at discount mart was 0.3 percent.