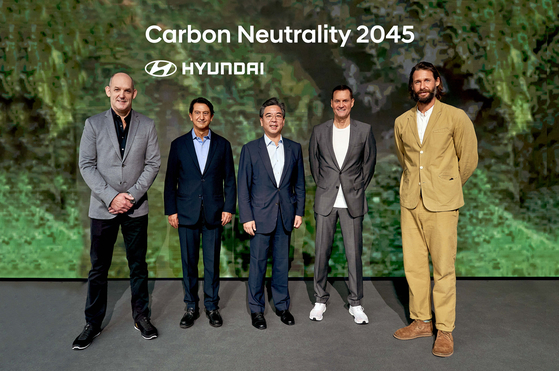 
Hyundai Motor announced its carbon neutrality goals during a press event held in Munich, Germany, ahead of the 2021 International Motor Show (IAA) Mobility, which begins Tuesday.

Hyundai Motor aims for 80 percent of its global sales to come from hydrogen fuel cell and battery driven-electric vehicles (EVs) by 2040. All new Hyundai Motor vehicles will be purely electric in Europe starting in 2035, and in other major countries by 2040.

The Korean car maker plans to strengthen its hydrogen-powered EV lineup. It is scheduled to introduce an upgraded model of the Nexo, its first hydrogen fuel-cell EV, and a multi-purpose vehicle model by the second half of 2023.

“Climate change is an undeniable challenge that needs everyone’s utmost and urgent attention,” said Chang Jae-hoon, president and CEO of Hyundai Motor. “Hyundai Motor commits to become carbon neutral in its global products and operations by 2045, and we will make investments in cleaner transportation and greener energy solutions to achieve a better and more sustainable future for all.

“Under our company’s vision, 'Progress for Humanity,' Hyundai Motor is determined to do the right thing for the world,” Chang added.

During the event, Hyundai unveiled a self-driving taxi based on Hyundai Motor's all-electric Ioniq 5, called the Robotaxi. 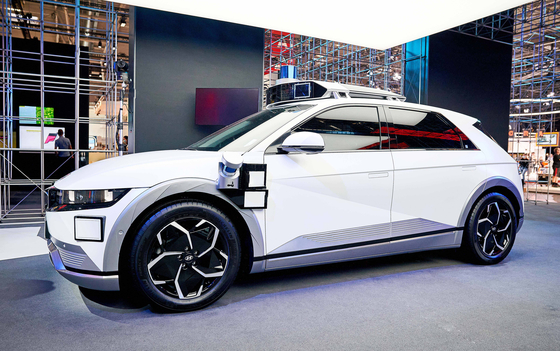 Hyundai Motor's driverless taxi, which will be offered as part of a ride-hailing service in the United States from 2023. [HYUNDAI MOTOR]


The driverless taxi, which was developed jointly by Hyundai Motor Group and U.S.-based driverless technology company Motional, has Level 4 autonomous driving technology, meaning it can operate on its own in most circumstances, recognize the environment and making certain decisions. Motional is a 50-50 joint venture between Hyundai Motor and mobility startup Aptiv established last year.

The taxi will be offered as part of a ride-hailing service in the United States from 2023, the company said.

Hyundai Motor’s carbon neutrality pledges came with other promises of cleaner and greener energy solutions. This includes not only using renewable energy like solar and wind power when manufacturing vehicles but also making long-term investments in future technologies.

Over 90 percent of electricity that it needs for global operations will be covered by renewable energy by 2040, with a goal of 100 percent by 2045, the company said. Its factory in the Czech Republic will be the first plant to meet the transition by 2022.

Hyundai Motor has also been making aggressive investments in developing technologies like green hydrogen, which refers to hydrogen produced through carbon-free methods, and Vehicle-to-grid (V2G).

V2G is one of the promising technologies that allows energy to be pushed back to the power grid from the battery of an EV. It enables efficient energy management, thus lessening dependence on fossil fuels, according to the auto maker. The company has been operating several pilot projects with various partners using the technology, with the aim of implementing it in its upcoming EVs. 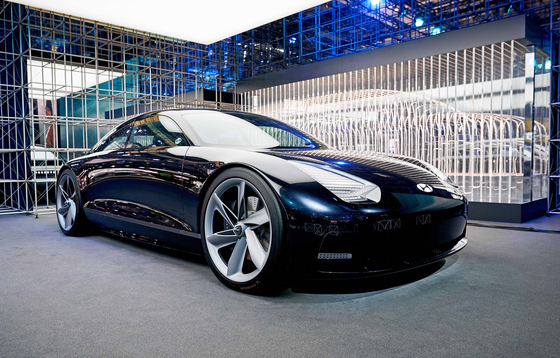 The all-electric Prophecy concept sedan of Ioniq 6, which is expected to launch next year. [HYUNDAI MOTOR]


Hyundai Motor believes those technologies will play a key role in “realizing reduction in greenhouse gas emissions by reducing the use of fossil fuel and helping the company with stable storage, supply and usage of the renewable energy.”

“IAA is yet another milestone along the sustainable journey we’ve been paving for years,” said Thomas Schemera, global chief marketing officer at Hyundai Motor. "Hyundai Motor will remain steadfast in our pursuit of carbon neutrality and lead the way in the development of holistic solutions.

“As a smart mobility solution provider, Hyundai also aspires to provide energy solutions for business and society overall,” he added. “Climate change won’t be solved without a concerted effort. We will strive to do more for the environment via multiple sustainability projects in the months to come, inviting everyone to join us on our journey towards a cleaner future.”

In its 500-square-meter (5,382-square-foot) booth in Munich, Hyundai Motor will display the driverless taxi Robotaxi, the Prophecy concept sedan of Ioniq 6, which is slated to launch next year, and a silhouette of an SUV model that is expected to hit the Korean market in the second half.
The motor show is open to the public from Tuesday through Sept. 12.