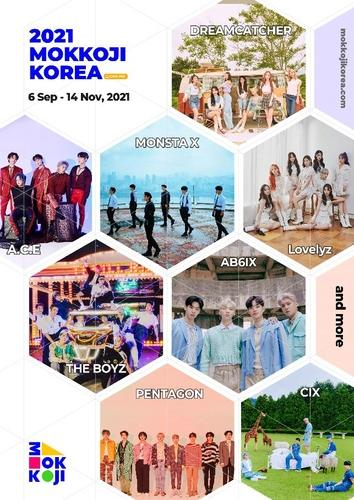 A poster of this year's Mokkoji Korea festival [MINISTRY OF CULTURE, SPORTS AND TOURISM]


The Ministry of Culture, Sports and Tourism kicked off an online hallyu, or Korean wave, festival on Monday.

The event titled “2021 Mokkoji Korea” is being hosted by the Culture Ministry and was organized by the Korean Foundation for International Cultural Exchange.

Mokkoji is a Korean word that refers to the gathering of people for games, parties and other occasions.

For this year’s event, the organizers have selected Russia, India and Indonesia as three “focus countries,” and are specifically targeting audience members from those countries to promote Korean culture.

During the first week, the festival will focus on Russia and K-pop groups such as The Boyz, Lovelyz and CIX will perform and introduce Korean beauty trends and traditional customs for the upcoming Chuseok holiday.

India’s focus week will run from Oct. 4 to 10, featuring K-pop stars Monsta X, Pentagon and AB6IX. while Indonesia’s will follow from Nov. 8 to 14, featuring A.C.E. and Dreamcatcher.

The festival runs through Nov. 14 at its website mokkojikorea.com.