K-pop girl groups and female solo acts today seem to be sharing a certain type of aesthetic. The most notable aspects are bold colors such as bright pastel and vivid neon, retro-style checkered and plaid patterns, complete with colorful hair accessories. Some elements may seem over-the-top and almost cartoonish, but many female K-pop idols are incorporating this fashion into their outfits and music videos.

Most recent examples include “Dumb Dumb” by Jeon Somi, “Weekend” by Taeyeon of Girls’ Generation, "You can't sit with us" by Sunmi, “Beam Beam” by Soyeon of (G)I-DLE and girl group STAYC’s “ASAP” and “Stereotype,” the latter which dropped on Monday.

Such aesthetic is referred to as “high teen” in Korea and has been steadily rising to popularity since around the time the Covid-19 pandemic broke out. 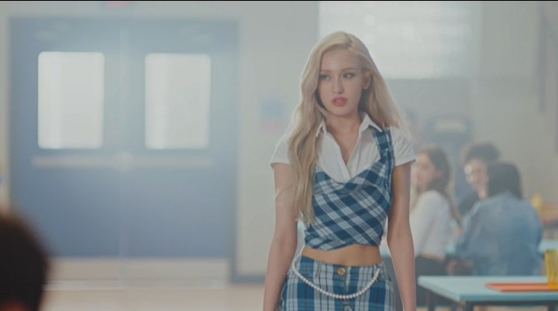 Singer Jeon Somi wears a plaid crop top and skirt in her music video for "Dumb Dumb" (2021), set in an American-style high school. [THE BLACK LABEL]


“The signature look of high teen fashion is defined by bold colors, patterns and accessories, as well as certain types of clothing such as crop tops,” fashion critic Youn Hae-sook told the Korea JoongAng Daily.

“Not only celebrities but also more young women are dressing themselves in high teen style, especially in youth hotspots like Hongdae. Many still find the fashion too daring for everyday wear, but even they are participating in the trend more subtly with accessories and phone cases.”

Taeyeon of Girls' Generation wears a bright pastel-colored bandana and crop top in her music video for "Weekend" (2021). [SCREEN CAPTURE]


High teen fashion is strongly reminiscent of American teen movies from the 1990s, emulating the outfits of the lead characters but with modern and Korean touches added. 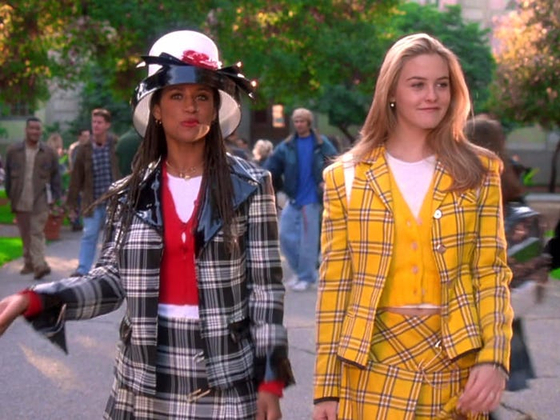 A scene from the 1995 American teen film "Clueless," showing the most iconic outfit from the movie, right. [PARAMOUNT PICTURES] 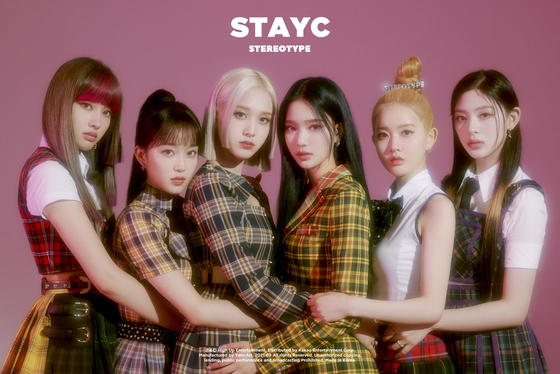 
Out of all the eras and trends, why are colorful aesthetics from '90s U.S. teen movies trending in the Korean idol scene and fashion today?

“The high teen fad is an extension of ‘Newtro,’” said Lee Dong-hyun, CEO of fashion consulting company FCL Korea. “Newtro” is a portmanteau of "new” and “retro” which emerged around 2018 to refer to cultural and style elements of bygone eras becoming trendy again.

“It’s quite common for fashion trends to come back after a generation, which is roughly 30 years,” he said. “That’s when the fashion starts feeling new again to youths in their teens and early twenties who haven’t experienced that era. For instance, the retro boom in 2010s Korea represented by the hit film 'Sunny' (2011) was based on trends from the 1980s. A decade later now, the retro fad has moved on to the '90s.”


“The analog feeling and free spirit of the 1990s seen in films of that era can feel novel to today’s younger generation who grew up in a digital culture,” said pop culture critic Kim Heon-sik. “The rise of high teen fashion shows that today’s youths are rediscovering '90s pop culture, and it has left an impression on them."

Youn says this phenomenon is not unique to Korea.

“The West is also seeing a boom in '90s nostalgia and a second heyday of '90s fashion trends,” she said. “Nostalgia for the '90s has become a subculture of its own, even among younger generations who didn’t live through that era. I believe it’s because '90s American pop culture was so iconic, and that’s why young Koreans also find the high teen aesthetic appealing.”

As well as being a fashion trend, high teen is inseparable from teenage identity and fantasies surrounding high school life. Since high teen takes inspiration from teen movies, music videos for “Dumb Dumb” and “Stereotype” are set in what look like American high schools, school cafeterias and at proms, while “Beam Beam” in set at an American-style burger joint. In the videos, the singers dress just like the student protagonists of 1990s teen films.

Soyeon of (G)I-DLE dressed as a waitress in an American-style burger joint in her music video for "Beam Beam” (2021). [SCREEN CAPTURE]


Such campus-related elements may suggest deeper reasons about why the high teen style is trending, especially considering the pandemic and Korea’s economic recession, according to Kim.

“Since classes turned online, there is practically no campus life for Korean high school and university students alike,” he said. “American high schools are similar to Korean colleges in terms of system, so the high teen trend is embracing not only Korean high school girls but also college-age women who want to vicariously enjoy campus life and the romanticism surrounding it through the aesthetic. Idols are actively embodying this fantasy in the form of high teen fashion.”

“On top of that, youths in Korea today are very dispirited in this harsh economic recession and pandemic,” Kim added. “Bold colors and patterns can be uplifting thanks to their bright and carefree vibe, so it makes sense that today’s youths are drawn to such designs.”

Taeyeon in her music video for "Weekend" [SCREEN CAPTURE]


“Since I’m mostly stuck at home due to the Covid-19 pandemic, I've become more interested in decorating my room and belongings with something vivid to brighten up the mood,” said college student Kim Da-ye. “High teen-style designs are not only vivid, but also feel exotic; we can’t express ourselves with fashion in Korean high schools since we wore uniforms. but American high school students can, and that created a certain fantasy about their lifestyle.”

Another fashion keyword that goes hand in hand with the high teen boom is “kitsch,” a term originally used to criticize designs that are excessively decorated and garish, but have gained cult popularity as an aesthetic. The aesthetic is represented by bold, colorful illustrations and collage-style designs.

“Kitsch designs such as bold polka dot patterns or colorful illustrations of cherries are also a key element of high teen fashion,” said Youn. “The rise of kitsch, which was once dismissed as childish, indicates that society has become more accepting of individual tastes. The fashion critiques I used to write years ago mainly focused on what trends certain celebrities were leading, but now more critiques focus on ordinary people who are enjoying diverse fashion styles in their own way.”

A scene from STAYC's music video for "ASAP" [SCREEN CAPTURE]

A scene from STAYC's music video for "ASAP" [SCREEN CAPTURE]


Considering the young age range of K-pop idol singers and their fans, taking inspiration from teen fashion is neither surprising nor new. But this time, the difference is that the inspiration comes from a more Western idea of teenage life, and the shift also suggests a change in how female K-pop idols are presenting themselves.

“Female idols have been wearing schoolgirl uniforms since the beginning of the idol scene,” said Kim. “But wearing Korean school uniforms and presenting themselves as American-style high school girls have completely different contexts. Korean-style uniforms emphasize an innocent and passive image, which usually appeals to male fans, while being a confident, bratty protagonist of an American teen movie is more appealing to female fans who want vicarious satisfaction." 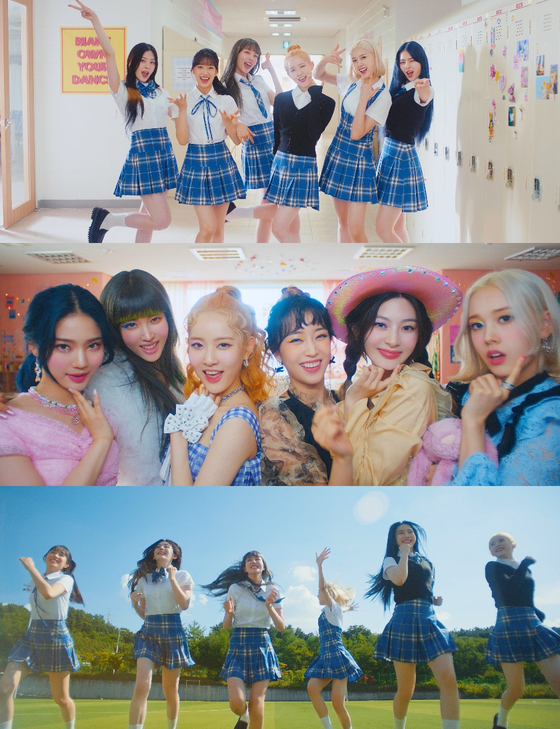 
"Since more girl groups like Blackpink are presenting a ‘girl crush’ image rather than appealing to male fans, I believe the Korean-style school uniform look has fallen out of trend and American teen fashion that shows more confidence and personality will be preferred for a while," Kim added.

Kim also believes that the high teen trend can be more than just a fashion phase and be an effective strategy for K-pop idols to appeal to a wider audience.

“Since '90s retro aesthetics are trending in other parts of the world too, most notably in Western countries, the current high teen style of female K-pop stars can be received positively by international audiences who are already familiar with '90s American teen aesthetics," he said. "It’s a two-birds-with-one-stone strategy to appeal to domestic female fans with novelty and confidence, and to the international audience with familiarity."