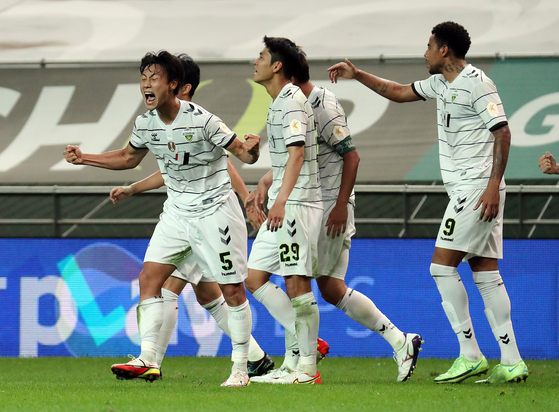 
Ulsan Hyundai continues its hold on the top spot in the K League 1 as Jeonbuk Hyundai Motors took one loss and one win over the past week while most of the league stopped for the international break.

Jeonbuk’s pursuit of the title took a blow on Wednesday, when it lost a game against the Pohang Steelers at Jeonju World Cup Stadium in Jeonju, North Jeolla. The Steelers took the lead early on in the match when Goh Young-jun slotted in the ball to pull ahead 1-0. With neither team able to find the back of the net in the second half, the game ended with the Steelers picking up three points.

Unable to win the last two matches, Jeonbuk was desperate for a win and a shot at redemption.

Jeonbuk opened the scoring in the 30th minute with Takahiro Kunimoto’s goal. A foul from Jeonbuk later allowed Seoul’s Osamr Ibanez to score an equalizer with a penalty kick.

Jeonbuk pulled ahead again at the start of the second half, when Stanislav Iljutcenko successfully converted a penalty.

Seoul wasn't finished just yet, as Cho Young-wook scored an equalizer in the 67th minute. Just a minute later, Seoul took an unexpected 3-2 lead with an own goal from Jeonbuk defender Hong Jeong-ho.

Desperate to level the score, Lee Seung-gi found the back of the net just four minutes after to take the score to 3-3. With just two minutes left on the clock, Hong made up for his own goal by scoring the winner. The match ended at 4-3 for Jeonbuk.

The K League is on an international break until Sept. 10 while national team players compete in a qualifier for the 2022 World Cup. Both Jeonbuk games were rescheduled during the break due to earlier cancellations.