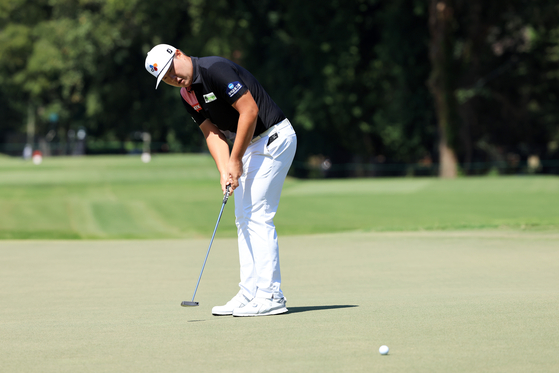 Im Sung-jae putts on the second green during the final round of the TOUR Championship on Sunday at East Lake Golf Club in Atlanta, Georgia. [GETTY IMAGES]


Im Sung-jae concluded the Tour Championship at East Lake Golf Club in Atlanta, Georgia on Sunday tied for 20th, but managed to make it into the PGA Tour record books with the most birdies in a single season.

The 23-year-old tied the record of 493 birdies held by Steve Flesch of the United States after the third round of the Tour Championship. Then, on the second hole of the last round, Im rolled in a 22-foot birdie putt to break the record, pumping his fist in celebration after the ball disappeared into the hole.

Following three consecutive bogeys from the seventh to ninth holes, Im made four more birdies to end his third season on the PGA Tour as the highest ranked Asian in the final FedExCup ranking for the second straight year.

The Tour Championship contenders started on Thursday with a score already bolstered by their FedEx Cup standings. Im started the tournament at three-under-par according to his 12th position in the standings. He finished with four-under-par, 279 for 20th on Sunday.

No. 1 Patrick Cantlay of the United States, who had started out in pole position with 10 under, ended the tournament in the same fashion, claiming the season's ultimate prize after outscoring Spanish golfer Jon Rahm by one stroke.

Im is the first Korean to earn a spot in the Tour Championship, which is only open to the top 30 golfers on the FedExCup standings, for three consecutive years. No Korean golfer has won the FedExCup since its launch in 2007, with K.J. Choi being the highest finisher in fifth place during the inaugural year.

The best Im has done was an 11th-place finish last season. In 2019, he was 19th on the final standing. This year, despite being unable to better his record, he gets to go home having made it into the PGA record books as the golfer with the most birdies in a season and also the golfer to have played the most tournaments on the PGA Tour this season.

"I didn't recognize this record until I heard it on the TV broadcast yesterday," said Im after his final round. "So I thought that I would wish to break that record today. Then I made a birdie on the second hole. I am very happy with this and hope keep this record for a long time."

This record is not only a reflection of Im's consistent form, but also his passion for golf.

"We have tournaments throughout the year, so even if I take a break for a while, I can play as many events as I want to. I am very happy and so grateful to just be able to play on the PGA Tour."