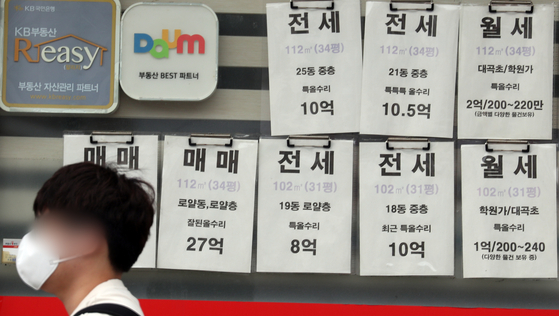 Posting of apartments for sales and rent displayed at a real estate agency in Gangnam on Sept. 5. It shows that only two are offered for sales. Due to shortage of supplies in apartments, home buyers are even seeking those that are foreclosed and up for auction.[NEWS1]

The overheated property market has even lent sizzle to demand for apartments on the auction block.

Some properties that have been foreclosed upon by banks and auctioned off by courts are going for prices higher than ordinary apartments in the same complex.

According to GG Auction, a company that provides information on real estate auctions, there were 9,442 properties -- including land, apartments and commercial stores and buildings -- auctioned by courts last month and 424 were successful. On average, the competition for each auction was 4.3 bidders.

The value of auctioned real estate is determined by a government-certified appraisal expert appointed by the court.

The ratio of successful bids to the appraised value averaged 79.2 percent in August for all types of real estate.

In the case of apartments, the ratio is hitting all-time records since GG Auction started tracking the prices in 2001.

In August, the ratio of final bids to appraised value for apartments was 106.7 percent, up from July's 101 percent.

In other words, the bids are topping the appraised values -- something that has rarely happened before.

In the auctions for apartments, the average number of bids was 7.7 in August, much higher than for other types of real estate and a jump from the previous month’s 6.3.

Incheon, which saw the second sharpest hike in apartment prices this year at 11.6 percent -- after Jeju's 12.2 percent -- reported the highest bid-to-appraised-value ratio last month of 123.9 percent.

In Incheon, the bid-to-appraised-value ratio has been rising for four consecutive months.

Gyeonggi is seeing a similar trend. Last month, its bid-to-appraised-value ratio was 115.1 percent, up 4 percentage points from July’s 111.1 percent. 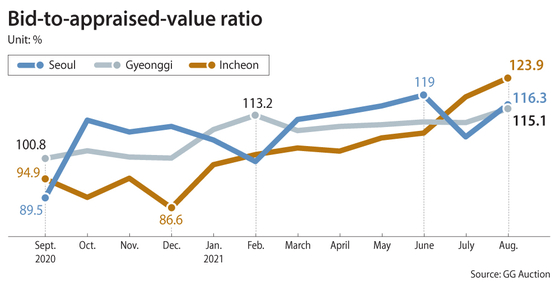 Even outside the greater Seoul area auctions are hot.

There were cases in which bids exceeded asking prices of the same kind of apartment in the regular market.

In July, a 197 square-meter apartment in one of the most affluent neighborhoods in Gangnam, Cheongdam-dong, was auctioned for 3.9 billion won. The market value of an apartment in the same complex was 3.7 billion won -- 6 percent less.

That apartment was the second most expensive among apartments auctioned in Seoul in July.

Last month, an 84.78 square-meter apartment in Deungchon-dong, Gangseo, another popular neighborhood south of the Han River, was auctioned for 973.9 million won.


The appraised value was 580 million won and 36 people made bids.

The same size apartment in the same complex sold for 880 million won in June.

The current asking price for such apartments, which were built in 1997, is around 1 billion won.

An 84.97 square-meter apartment in Dongchun-dong, Yeonsu district in Incheon last month was auctioned for 506.9 million won. An apartment of the same size in the same complex sold for 495 million won in April.

“There is a significant shortage of apartments for sale and there are not many new supplies,” said Seo Jin-hyeong, a professor of real estate at Kyung-in Women’s University. “Apartments up for auction are getting noticed by homebuyers.”

GG Auction noted that despite the government’s warning that apartment prices could fall in coming years, demand for auctioned properties remains high.