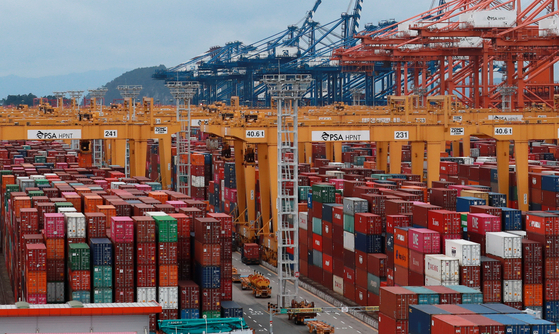 Containers are stacked at the Busan New Port early this month. [YONHAP]

Korea reported its 15th current account surplus in a row in July, $8.21 billion, led by a record surplus in the transport account.

According to a preliminary report from the Bank of Korea on Tuesday, the current account had a surplus of $8.21 billion in July, up 16.8 percent on-year.

The surplus in July was driven by a strong recovery in the services account, which includes transport. The services account deficit fell 93.8 percent to $80 million in July from $1.3 billion in the same month last year. Last year, services suffered severely from the coronavirus pandemic.

Robust recovery in exports boosted shipping and air cargo demand leading to a transport account surplus of $1.59 billion in July, a record high, and a whopping 159 times the $10 million surplus logged in July 2020.

"The transport account hit a record surplus for the third month," said Lee Seong-ho, director of the monetary and financial statistics division at the central bank during an online briefing Tuesday.

"The Shanghai Containerized Freight Index [which shows overall trends in shipping rates] has been on the rise from 3,713 in June to 4,038 in July and is estimated to hit around 4,308 in August."

The freight index for July increased by a whopping 284.5 percent compared to the same month the previous year.

Both exports and imports of goods increased in July but imports grew faster.

Exports of petroleum, chemical and steel products increased by over 40 percent on-year thanks to recovery from the pandemic worldwide, according to the central bank. Exports of chips increased by 38.2 percent and auto parts 35 percent.

Imports in the same month amounted to $48.58 billion, up 35 percent on-year. The increase in imports reflected increased prices of raw materials including oil prices.

Asked whether imports outpacing exports will strain the local economy, Lee said exports and imports are growing on par when ruling out the oil price hike, adding, "We don't think this will be a problem."

The central bank said that domestic institutional investors had substantial dividend incomes in the month.

In the first seven months of this year, the accumulative current account surplus hit $52.55 billion, up 101.7 percent on-year.

As the country continues to post monthly current account surpluses, Lee said  the country's annual surplus may reach around $80 billion.