All new commercial vehicles from Hyundai Motor and Kia such as buses and heavy duty trucks will be fuel cell and battery-driven electric vehicles (EVs) from now on, the company announced Tuesday.

All existing models will be given fuel cell systems by 2028, and Hyundai Motor Group says it's the first automotive company to make such a transition.

This is part of the company’s attempt to make hydrogen energy "used by everyone, everything and everywhere” with the goal of realizing a so-called hydrogen society by 2040, which was described during a global forum called "Hydrogen Wave" held Tuesday afternoon online.

“Hyundai Motor Group’s vision is to apply hydrogen energy in all areas of life and industry such as our homes, work-places and factories. The goal is to make hydrogen readily used for everyone, everything and everywhere,” said Hyundai Motor Group Chairman Euisun Chung during the forum. “We want to offer practical solutions for the sustainable development of humanity and with these breakthroughs, we aim to help foster a worldwide hydrogen society by 2040.”

This transition will contribute to an eco-friendly mobility ecosystem in Korea, which could set an example for other countries could follow, Hyundai Motor Group said.

During the forum, Hyundai Motor Group also described next-generation fuel cell systems that cost less but can be applied in more sectors than the previous ones.

The 100-kilowatt (kW) version of the third-generation fuel cell system has shrunk in size by about 30 percent compared to the previous system, which makes it easier to use in many different types of vehicles. The 200-kilowatt version will not see a dramatic change in size but the power output has been doubled. 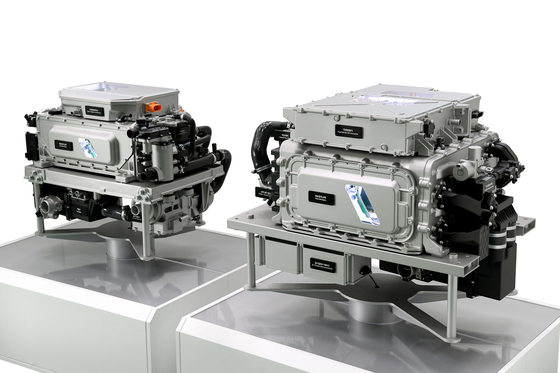 The image of next-generation fuel cell systems that are expected to hit the market in 2023. [HYUNDAI MOTOR GROUP]


The price of the third-generation fuel cell system, which is expected to hit the market in 2023, will be halved, with the company planning more reductions around 2030 so that hydrogen fuel-cell EVs will have price competitiveness against battery-driven EVs. 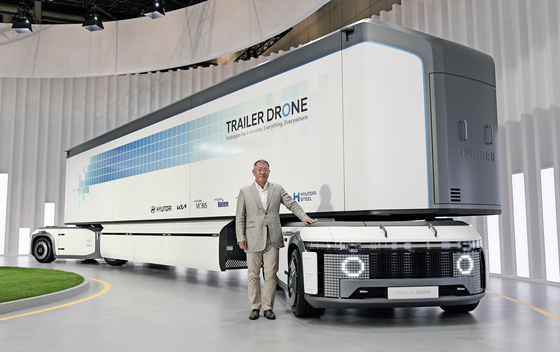 
Trailer Drone, a hydrogen-powered container transportation system capable of operating fully autonomously, will be able to run over 1,000 kilometers (621.4 miles) on a single charge.

A hybrid sports car called Vision FK has a maximum output of over 500kW. It can accelerate from 0 to 100 kilometers per hour in less than four seconds. The sports car can run over 600 kilometers on a single charge. 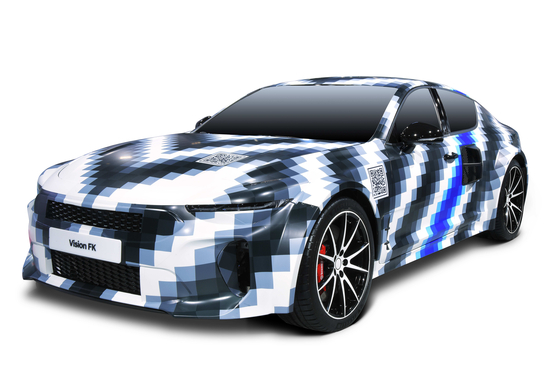 Vision FK, a hybrid sports car that has a maximum output of over 500kW. The sports car can run over 600 kilometers on a single charge. [HYUNDAI MOTOR GROUP]

“The degree and frequency of environmental disasters is rising fast and we now face a Code Red warning for humanity,” Chung added. “The group seeks to offer powerful and pragmatic solutions for combatting climate change via the tremendous potential of hydrogen energy.”

The introduced models will be on display at the Hydrogen Village exhibition in Kintex, Goyang in Gyeonggi, which will run from Sept. 8 through 11. It will have 4,872-square-meters (52,442-square-feet) of space. 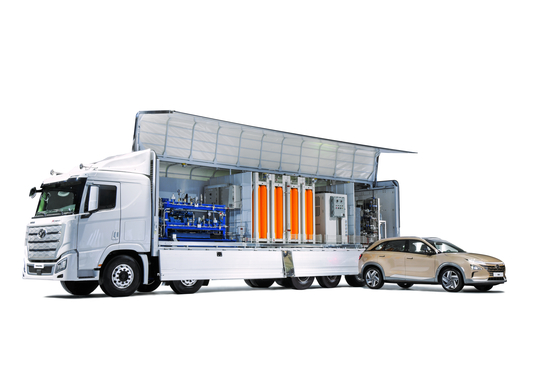