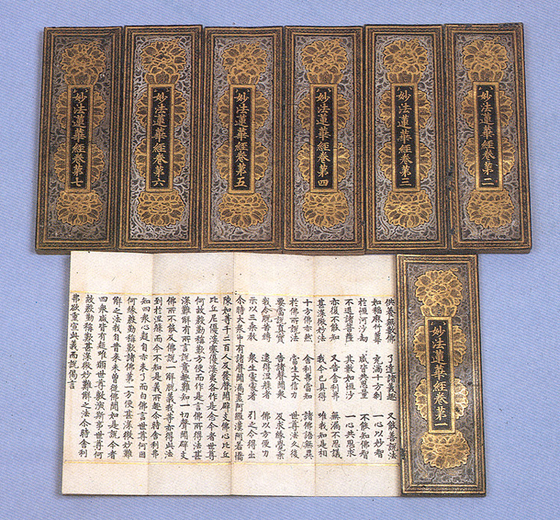 Name: Transcription of Saddharmapundarika Sutra (The Lotus Sutra) in Ink on White Paper

Saddharmapundarīka Sutra is often called by its shortened name the “Lotus Sutra.”

It is the principal scripture for the T'ien-t'ai Sect. The main idea of the book is that the way to become a Buddha is to be open to everybody. Along with the Avatamsaka Sutra, it has made a great influence in establishing Korean Buddhist philosophy. It is the most widely circulated Buddhist scripture since the Period of Three Kingdoms (57 B.C. to A.D. 668).

This book contains the seven volumes of the Lotus Sutra translated by Kumārajiva of the Late Chin of China. The scripture was carefully hand-copied by Ha Deokran in 1377 (the 3rd year of King U of Goryeo) with a prayer for the longevity of his father and soul of his deceased mother. The contents were written in ink on white mulberry paper.

Each volume is made in the form of a folding screen 10.9 centimeters (0.36 feet) long and 31.8 centimeters wide. On the cover of each volume is a magnificent depiction of flowers painted in gold and silver. The title of each book is also written in gold. At the beginning of each book is a detailed painting of the summary of the content colored in gold. From a remark left at the end of the book by a Japanese person we can tell that this book had been taken to Japan around 1443 (the 25th year of King Sejong of Joseon) and kept in the royal storage of Gwangdaewon since 1605 (the 38th year of King Seonjo).

This book contains both writing that explain why this was produced and a painting that summarizes the content. It has been kept in a relatively good condition. In particular, having been recovered from Japan, it is considered as a valuable cultural asset.