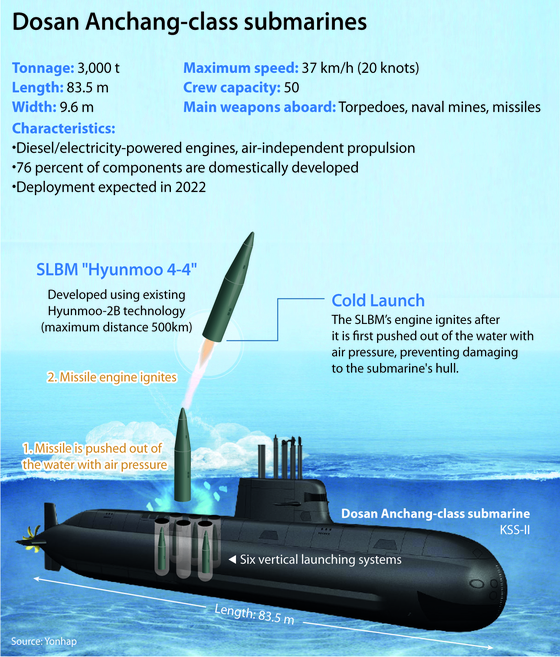 The test makes South Korea the eighth country in the world to possess the weapon, which is widely considered vital to maintaining a military’s retaliatory strike capability.

An SLBM from the Navy submarine Dosan Anchang was launched on Thursday, Sept. 2, off the coast of Taean, South Chungcheong, under the supervision of the Agency for Defense Development (ADD), according to a defense official who spoke on the condition of anonymity.

The test took the form of a cold launch, in which the SLBM’s engine ignites after it is first pushed out of the water with air pressure.

The SLBMs are expected to be installed on the Navy’s Dosan Anchang-class submarines, which is the first of the Navy’s submarines to possess a vertical launching system for SLBMs and was commissioned on Aug. 13.

Each vessel from this 3,000-ton class of submarines is expected to have six such systems in place that are capable of firing the SLBM, which is codenamed Hyunmoo 4-4 and is reportedly based on existing Hyunmoo-2B missile technology that can reach targets up to 500 kilometers (310 miles) away.

SLBM development is usually carried out in three stages: a ground test, an underwater test and a submarine test.

After successfully conducting a ground launch test at the end of last year, the military completed an underwater test launch from a barge last month before Thursday’s first test from a submarine.

The successful test makes South Korea the eighth country in the world to develop an SLBM after the United States, Russia, Britain, France, India, China and North Korea.

Being launched from underwater, SLBMs are harder to detect in advance than land-based missiles. The new missile is expected to serve as a key deterrence tool for South Korea.

However, South Korean military officials were not the only ones observing the SLBM test launch.

Ahead of the Sept. 2 test launch, a Chinese surveillance vessel appeared in the waters off Heuksan Island, South Jeolla, in the Yellow Sea.

“China deployed surveillance vessels a few days before the test launch,” a government official told the JoongAng Ilbo on the condition of anonymity. “It seems that it was collecting information in order to monitor domestic SLBM development.”

Dongdiao-class surveillance ships displace 6,000 tons, measure approximately 130 meters (427 feet) long, and can travel at a maximum speed of 20 knots (23 miles per hour). Such ships are armed with a double-mounted 25-millimeter and 37-millimeter gun.

Dongdiao-class ships in recent years have conducted increased surveillance operations around the Korean Peninsula, in addition to tracking joint exercises by South Korea, Japan and the United States.