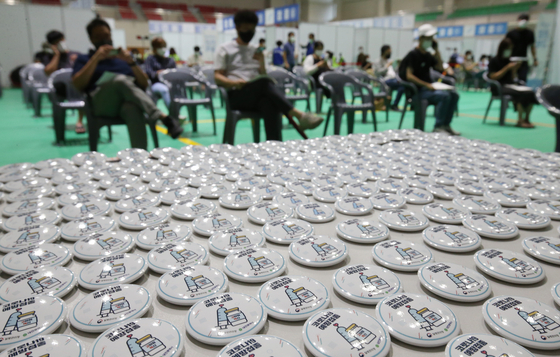 Covid-19 vaccination badges, made to encourage inoculations, are displayed at a vaccination center in Daejeon on Tuesday. More than 60 percent of the country's 52-million population had received one dose of a Covid-19 vaccine as of 10:30 a.m. Tuesday. [NEWS1]


The government’s top disease official said Tuesday Korea will be able shift its Covid-19 strategy towards living with the virus at the end of October, when at least 80 percent of adults are set to be fully vaccinated.

A new strategy called “With Corona” — similar to the "With Covid" strategy being discussed in other countries around the world — will put less emphasis on the number of daily new infections and more on managing severely-ill patients.

Korea is hoping to have 70 percent of its population given their first shot of a Covid-19 vaccine by the upcoming Chuseok harvest holidays, from Sept. 20 to 22.

Jeong Eun-kyeong, commissioner of the Korea Disease Control and Prevention Agency (KDCA), said during a parliamentary committee session on Tuesday, "The government aims to complete vaccinations as much as possible by the end of October [...] and be able to apply ‘With Corona’ [from then.]”

Based on mathematical modeling by experts, Jeong said, at least 90 percent of the elderly and 80 percent of adults must be fully vaccinated in order for the country to reduce severely ill virus patients and control new infections, eventually moving onto a different Covid strategy.

As of Tuesday morning, 36 percent of the country’s population had been fully vaccinated, while 60.1 percent have received one dose of Covid-19 vaccines, according to the KDCA.

On Monday, President Moon Jae-in also raised the possibility of such a shift as the country’s vaccination program gains pace.

"If the Covid-19 situation is alleviated, we will be able to seek a gradual transition to a new virus prevention system to be harmonious with daily life," the president said during a weekly meeting with senior Blue House aides.

Health authorities cited a survey conducted by the Health Ministry of 1,000 adults, showing seven out of 10 Koreans believe the government should transition into the "With Corona" system of coexisting with Covid-19.

According to the survey revealed on Tuesday, 73.3 percent supported the transition, compared to 20.2 percent who opposed.

Regarding the appropriate timing of such a transition, more than half of the respondents, or 52.4 percent, answered the end of November, when more than 70 percent of the population completes their vaccinations, while 30.3 percent responded as early as the end of this month, when 70 percent gets at least one dose.

Authorities, however, said the transition doesn’t mean they will immediately ease social distancing measures or other preventive rules, and reaffirmed indoor mask mandates will still need to be maintained.

“It is necessary to keep indoor mask mandates to the very end, until it becomes safer,” the commissioner said.

“There is quite a lot of people who haven’t received a vaccine, and we need to prepare for breakthrough infections,” said Jeong.

Easing of social distancing rules will be done gradually depending on the sector of public facilities, she added.

“If the government eases the distancing restrictions, I believe it will be done starting with outdoor activities, which are [relatively] safe,” Jeong said.

Despite discussions emerging that the government should reshape its quarantine policy, Korea recorded the highest number of new infections Tuesday for any Tuesday so far.

The spread of the highly contagious Delta variant has made it more difficult for health authorities to curb the virus spread, despite the strongest social distancing measures being in place for over two months.

The proportion of Delta cases in all local Covid-19 infections from Aug. 29 to Sept. 4 came to 97 percent, up from 94.3 percent a week earlier.

The caseload of coronavirus variants reached 23,388 in total, with the number of Delta, first reported in India, tallied at 19,951, the KDCA said.