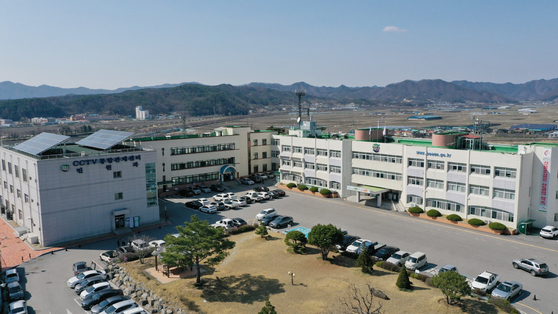 Members of some Chinese cults buy large buildings that are used as housing or facilities, such as a prayer center, for cult-related activities. The buildings have been reported to hold at least 50 people. Many Chinese living in Boeun County, North Chungcheong, are naturalized Korean citizens who make a living in the county by farming corn, beans and ginseng. [BOEUN COUNTY]


A two-story iron warehouse in Boeun County, North Chungcheong, has been out of business for years, but articles of freshly washed clothing pegged on the clotheslines to dry can be found on the rooftop.

"The building used to be a storage unit for a factory, but a couple years ago someone purchased it," said one resident in Boeun County. "I don't know who lives there, and I don't know what they are doing [in an empty factory]."

According to Boeun County Office, the inhabitants are members of Chinese religious cults.

Boeun County Office calculated that 186 pieces of land were sold to Chinese people in Korea who are members of a newly emerging religious cult from 2018 to July 2021.

"Believers of these cults attend churches with names that can be translated to 'Almighty Church of God' or 'Almighty Church,' and they have established agricultural companies that purchase buildings and farmland in Boeun County," a Boeun County official said.

Foreign companies owned the most land area, and of them, Chinese companies accounted for the majority.

Real estate documents showed that the owner of a youth hostel in the county is a member of a cult under "Almighty Church."

The hostel, which is now a prayer center for the Chinese religious cult, was purchased for 1 billion won ($847,000).

The agricultural companies owned by "Almighty Church" also bought a 20,000-square-meter plot of land for 2.5 billion won. The purchasing prices are reported to be 20 to 40 percent more expensive than the actual market price.

"They buy relatively cheap, arable lands in Boeun County and make a living through farming. Land ownership can be traced back to companies and individual members themselves."

With 35.7 percent of the county's population over the age of 65, there are less young people available to manage the farmland.

The Boeun County official also said that large amounts of foreign-owned lands may give rise to bigger problems in the future.

"Foreigners can participate in more illegal activities like money laundering, and if many of them simultaneously take part in such schemes, it can really disturb our real estate market," the official said.

However, the laws that are in place today do not regulate land purchases by foreigners.

The Boeun County Office has proposed various measures to regulate land purchases by foreigners, including enacting laws on restricting foreign land ownership and designating a limited number of zones that are available for sale to foreigners.

Until appropriate policies are implemented, the military, along with the county's residents, will monitor the status of foreign land transactions.