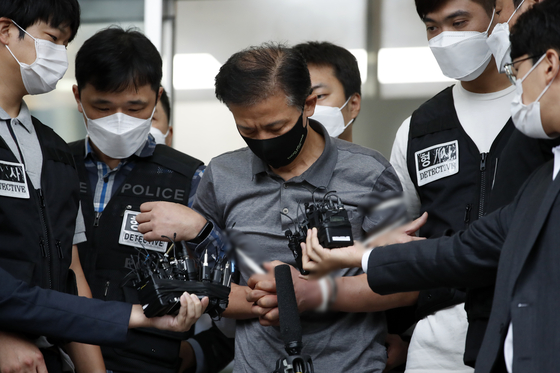 Kang Yun-seong, 56, who allegedly killed two women last month after cutting off his ankle monitor, is escorted out of Songpa Police Precinct and transferred to the Seoul Eastern District Prosecutors' Office on Tuesday morning. Kang faces six charges in total, including murder, violation of laws on parolee’s monitoring devices, robbery and fraud. The police said that Kang’s motives for murder stemmed from his financial issues. [NEWS1]


The police on Tuesday announced that Kang Yun-seong, an ex-convict who confessed to the murder of two women last month before and after cutting off his location-tracking ankle monitor, committed the crimes due to financial reasons.

“Kang’s motive for the crimes stemmed from financial reasons, and he also had planned intentions to break parole and commit murder,” the police said in a press briefing at Songpa Police Precinct in Songpa District, southern Seoul.

According to police, Kang allegedly rented a car with the help of an acquaintance, who was not aware of Kang's criminal plan, on Aug. 25, one day before committing his first murder.

The next day, on Aug. 26, Kang purchased a pair of bolt cutters from a hardware store and a 30-centimeter (12-inch)-long kitchen knife at a supermarket near his residency in Songpa District.

About four hours later, Kang met with his first victim to ask for money in order to pay back the 20 million won ($17,000) he borrowed from his second victim. When the woman refused to give him money, Kang reportedly murdered her in his house with the kitchen knife and took her credit card.

With the credit card, Kang spent 5.96 million won to buy four cell phones, which he then resold for more money.

On Aug. 27, Kang broke off his ankle monitor with the bolt cutters and allegedly killed the second victim in his rental car when she said she would report him to the police if he does not pay her back.

The police additionally found that there could have been a third victim. Kang apparently confused the woman's phone number and could not properly contact her.

The two victims were acquaintances of Kang, whom he met following his release from prison as a parolee in May this year, after serving a 15-year prison sentence for robbery and sexual assault.

Since then, Kang had worked as a door-to-door cosmetics salesman and mostly sold his products to women, despite his record of sex crimes.

However, DNA testing by the National Forensic service showed that the two victims in his most recent crimes showed no signs of sexual assault.

How Kang lured the victims into meeting him and whether or not the victims knew of Kang’s previous crimes still remains unknown.

Psychological test results that would point to any mental disorders such as anti-social personality disorder are yet to be released.

Also during the press briefing, the police admitted that while there were legal limits to their search for Kang, who had cut off his ankle monitor and absconded, there was also some negligence on the police’s part during their initial response.

Prior to the press briefing, the police transferred Kang to the Seoul Eastern District Prosecutors' Office where he will be held in the detention center. Kang faces six charges including murder, violation of laws on parolee’s monitoring devices, robbery and fraud.

While being escorted out of the Songpa Police Precinct, Kang apologized to the victims and their families, and also said, “I murdered them for money, not for sexual reasons.”