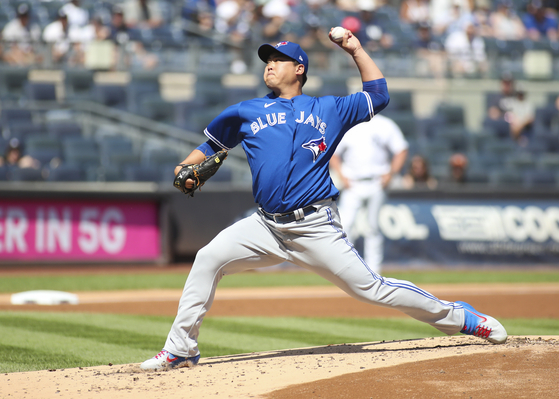 
After a tough couple of weeks, Ryu Hyun-jin rose to the occasion to lead the Toronto Blue Jays to a big 8-0 over the New York Yankees at Yankee Stadium in New York on Monday.

Ryu gave up three hits in six innings pitched with no walks and six strikeouts. Monday's game was Ryu's first no-walk outing since Aug. 3, when he led the Blue Jays to another big win over the Cleveland Indians, 7-2.

Ryu received some serious run support on Monday — before he even made it to the mound, Marcus Semien and Vladimir Guerrero had hit a home run each to give the Blue Jays an early 2-0 lead. The Korean southpaw responded in kind, stringing together two groundouts and a strikeout to sit down the Yankees in order.

The Blue Jays' bats were quiet for the rest of Ryu's time on the mound, but the ace continued to put in work to keep the lead safe. Ryu again retired the Yankees in order in the second before allowing a single knock in the third.

The Yankees picked up two other singles against Ryu — in the fourth and sixth — but the veteran continued to throw fire and the New York club had no opportunity to capitalize on any runners on base. Throughout Ryu's sixth innings of work, the Yankees only managed to touch the bag at second once.

Ryu left the mound at the top of the seventh with the Blue Jays up 3-0. Toronto cemented that victory with a huge ninth inning, when both Teoscar Hernandez and Semien hit homers as the Blue Jays piled on to take the final score to 8-0.

Ryu's departure at the top of the seventh in the midst of such a dominant performance was reportedly due to arm tightness after overstretching himself with a string of sliders, a rarely used pitch in his arsenal.

“I felt really good with all of my pitches today,” Ryu was quoted as saying on MLB.com. “It’s one of those games where I felt the best. I said after my last start that every game means a lot for us right now. It puts us in a better position. This is something we have to focus on. I wasn’t worried about pitch counts or anything. I just wanted to focus on the game.”

Ryu's big night against the Yankees comes off the back of a difficult month in which he looked uncharacteristically shaky at the plate. Ryu finished August with two wins, three losses and a no decision with a 6.21 ERA for the month. His struggle at the plate saw his ERA rise from 3.26 at the end of July to 3.92 by the end of August.

Ryu's return to form will come as a big relief to the Blue Jays. The Korean ace was signed to the team at the end of the 2019 season to lead the young rotation and pull through in the big games. The rotation has grown up and Ryu is no longer pulling the team behind him, but that need for a big presence in the games that count the most is as important now as it was a year and a half ago.


Any game against the Yankees is a big game, and Monday's was especially important. With the Blue Jays now just three games behind the Boston Red Sox with a few games in hand, the Toronto club has a shot at earning a wild card spot before the regular season ends in a few weeks on Oct. 3. ESPN put the Blue Jays' chance at reaching the playoffs at just over 25 percent with 26 games left to play.