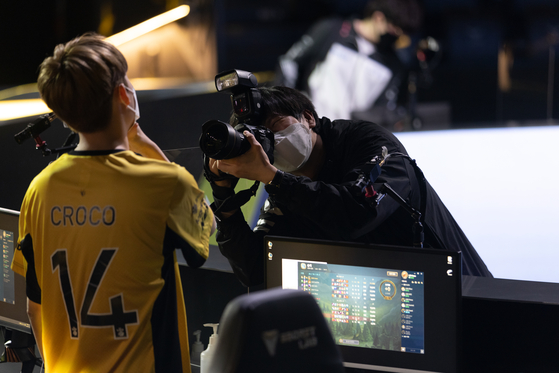 
Many fans may not be aware of its existence, but League of Legends Champions Korea runs an official Flickr account. On it, hundreds of photos — mostly taken at LoL Park, although occasionally elsewhere — are uploaded like clockwork for each and every match day. All of them are of pristine quality.

For journalists, social media managers, devout fans and players' parents, the Flickr page has long been considered a treasure trove and is often a lifesaver. Nowhere else are such professional-grade photos of the league's stars shared so regularly, so predictably.

Behind the account and the vast majority of its photos is one man: Lee Se-hyun, LCK's official photographer. The Korea JoongAng Daily caught up with Lee in July to hear about his approach to the job, his love for esports and how he manages the balance between artist and record keeper. Following are edited excerpts of the interview. 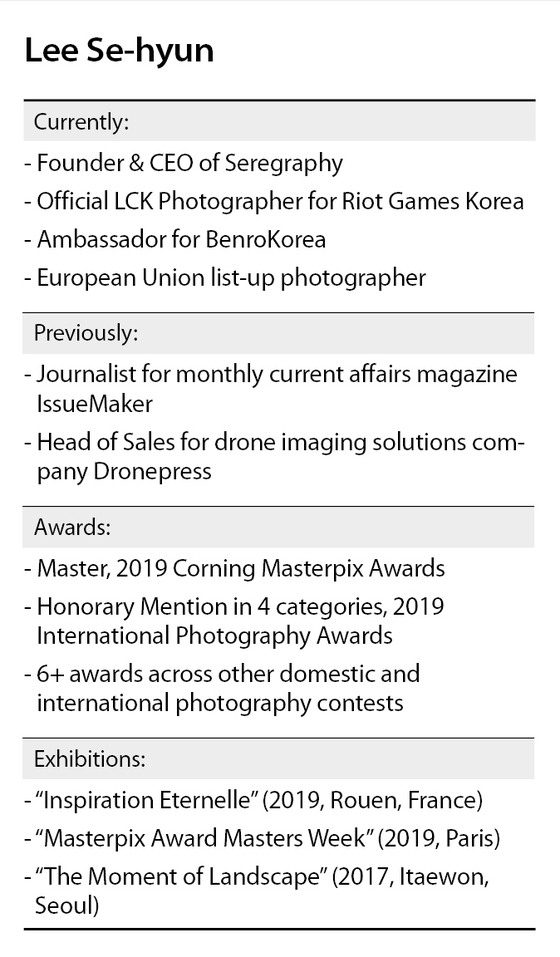 Q. Your background prior to becoming LCK's official photographer is far removed from esports or gaming. How did you come to work so closely with Riot Games Korea?


A. My first contact with Riot Korea was in the summer of 2018, through Naver DMs. I was contracted to photograph the 2018 LCK Summer Split Finals, which was the beginning of our relationship. Later in the year, I also photographed the "LoL Run" 5k run event — riding alongside the runners on a bicycle and taking one-handed photos — as well as the 2018 World Championship.

The current setup was entered in the 2019 season. Riot Korea was looking for a freelance records photographer who would capture and preserve every single LCK match, I was offered the opportunity, and I took it. At that point in time, I hadn't played League of Legends yet, although I was very familiar with gaming — I played Chaos a whole lot back in the day.

Many of my friends who did play League, though, were very jealous when I told them about my new job.


Q. What are your exact duties as LCK's official photographer? What does a usual day for you look like?

A. I can't disclose the exact details of the agreement, naturally, but it mostly involves photographing all of the league's various affairs as necessary and managing the official Flickr account. On occasion, the LCK match schedule will clash with a big national ceremony and I'll ask someone else to fill in at LoL Park for a day, but such conflicts are quite rare.

On normal LCK days, I arrive at the arena by 4 p.m., say hello to everyone there, take a few "sketch" shots and get ready for stage shots. During the draft phase, I also take time to shoot fan placards. Once the match ends, I take photos of the winning team, the player-of-the-game interview, then follow the team to the press room and take some more shots there. Then I repeat everything for the second match of the day.

When I get home, I transfer all of the day's photos (1,000 to 1,200 shots) to my workstation, make sweeping edits for color and brightness and whatnot, then click convert and go to sleep. That's the first pass. In the morning, I check the converted photos, pick out only the better ones (400 to 500), adjust for color once again, then go through a second round of filtering to arrive at the batch (around 200) that will be uploaded to Flickr.

By the time I'm done arranging and uploading the final batch, it's around 1 to 2 p.m. So I have lunch, get ready for work, and head out again. 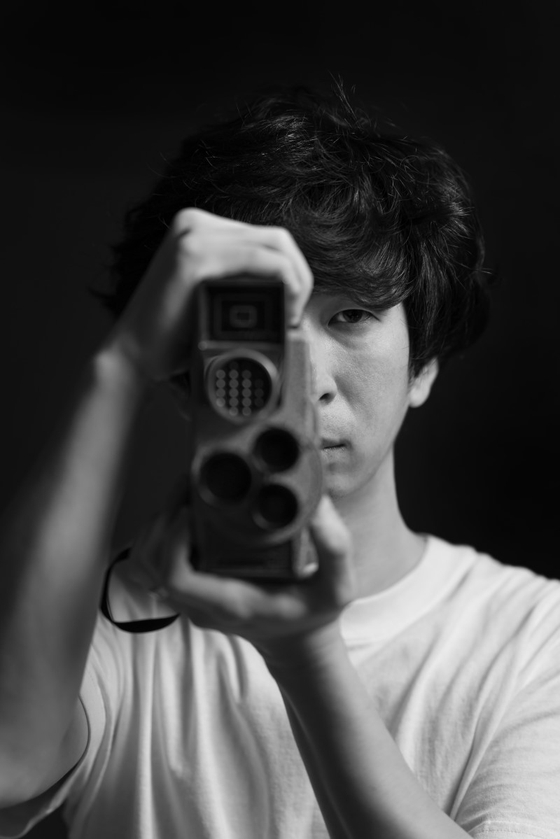 
Q. How would you interpret your own role in the grand scheme of the league?

A. I believe it's my duty to be part of LoL Park's "scenery" — an approach perhaps influenced by my background in landscape photography. The idea is to have a very strong neutral rapport with everyone and blend in to such a degree that no one "cares" whether I'm there or not. And from that perspective, the primary objective is to document everything that happens.

LoL esports has been around for ages in Korea, but an official photographic record did not exist for a very long time. The only official records prior to 2019 are the broadcasts themselves, which is a shame. I feel that maintaining a proper photo archive is absolutely essential to preserving the whole history of a league. How players used to dress, how one player used to look like — so many things can so easily fade in time.

I'd also like to think I occasionally help players loosen up before a match. You'll often see players pose for silly shots while setting up on stage, or while waiting to enter the arena. I feel it has become a useful little ritual that can serve as a moment to ease the nerves before the game, especially for the fresher players.


Q. What are some things you need to be careful about on the job?

A. One thing is absolutely minimizing the length of time I'm caught on broadcast camera. There are seven to nine cameras scattered around the arena, and most of them move or at least pan. I have all of their pathing memorized so I can avoid getting in their way as much as possible without even thinking about it.

Another thing is to keep a healthy professional distance between myself and the players. Some people have asked why I never asked Faker for an autograph when I get to see him every week. But if you think about it, stunts like that are absolutely off-limits. It may sound obvious, but there's a line I need to respect at all times. The moment I cross it, I'll become a fan with insider access, and not the neutral record keeper I need to be. 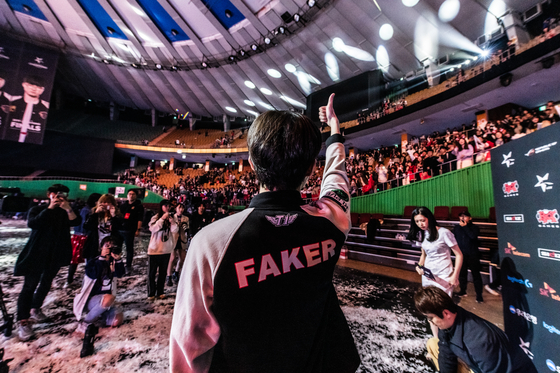 Lee ″Faker″ Sang-hyeok holds his thumb up toward the crowd after winning the 2019 LCK Spring Split Finals. Lee Se-hyun asked Faker to take this pose. The shot was shared around the world and was later used in a subway station birthday ad for Faker. [RIOT GAMES]


Q. What's your relationship with photographers from private media outlets?

A. My role gives me access to areas within LoL Park that are restricted to press, and players are by nature more careful around journalists, so some of my shots will always be "exclusive." Theoretically, that could be a reason for tension — but most of us have been seeing each other week in and week out for years now, often grabbing drinks together after big events. I think we get along well.


Q. Have you started playing League yourself?

A. Players freak out when I tell them how much I play! I played around 2,500 games last year, I think, around 200 games a month. I already have over 600,000 mastery points on Master Yi. This year, I've really taken a liking to Xerath — I think I might have found "the one," actually. I've already played 349 ranked games with him this season.

Getting more familiar with the game helps with the job, I feel. My solo queue rank isn't that high, but you don't need to be Challenger to chat some League with the players, right? It really helps in building rapport. 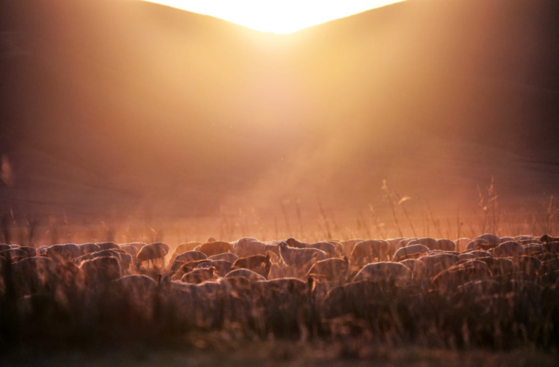 
Q. Do you ever feel compelled to take auteuristic shots while on LCK duty?

A. Creativity-wise — in my first year, I had a lot of ideas I wanted to try out, but because I had yet to establish sufficient rapport with the teams and players, my range was quite limited. These days, though, you'll see players in new, hilarious poses rather often. I think Gen.G really kicked off the trend of players intentionally posing for comedic shots, which soon spread to other teams.

I never try to be artsy on purpose on LCK duty because my primary duty is to document and record the league. Indulging in anything that might interfere with it would be unprofessional. Sometimes I'll put in small creative twists to keep the shots interesting, though. On some match days, you'll see photos where players are draped in really awesome rim lights and the colors give off a surreal vibe. And for behind-the-scenes shoots of opening sequence filmings, I take extra care in editing to really flesh out all the images.


Q. How are you navigating the balance between your artistic and commercial careers?

A. I continue to pursue landscape photography, to visit historic sites in Korean history and leave records, to hold exhibitions... but in order to do those things, I also need to put food on the table, and that's where event photography comes in. I actually think there's significant overlap between the two, though. In a way, event photography is about capturing "scenes" to preserve an occurrence in "history." 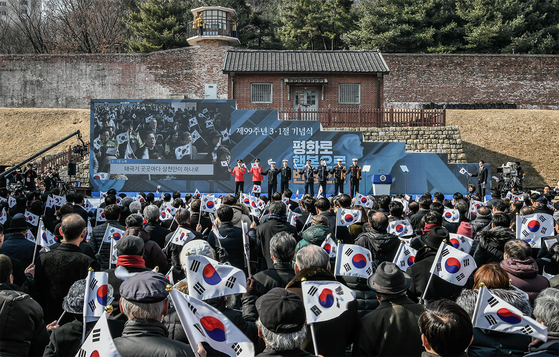 The celebration of the 99th anniversary of the March 1 Independence Movement Day. [LEE SE-HYUN]


Q. Has your work with LCK influenced your perspective as an artist?

A. That's a difficult question. I don't think there has been any direct influence, but the job did introduce me to a huge new world and a whole lot of new people. That being said, as I've mentioned before, creative work and commercial photography are two different beasts. My duty as the LCK photographer is solely to capture the history and scenery of the league and LoL Park. Some of those shots might have some artistic overtones, but that's the extent of identity overflow.


Q. How long do you want to serve as LCK's official photographer?

A. The league might not last forever, but for as long as it exists, I would like to stay on, for as long as I can. Recording and documenting the players' journeys through the years as they grow up — it's truly fulfilling work, and it fills me with joy every day.