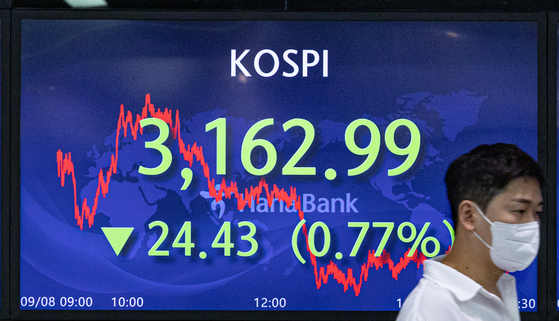 A screen in Hana Bank's trading room in central Seoul shows the Kospi closing at 3,162.99 points on Wednesday, down 24.43 points, or 0.77 percent, from the previous trading day. [NEWS1]


Stocks extended losses to the second straight session Wednesday as investors offloaded tech shares amid concerns about regulations against online platform giants. The won fell against the dollar.

The main index started off on a downbeat note amid investor concerns over the pace of the U.S. economic recovery from the pandemic-induced slump after a disappointing U.S. jobs report released Friday.

The Kospi traded bearish throughout the session as investors dumped online platform stocks amid growing concerns about regulations against their market dominance.

A day earlier, ruling Democratic Party lawmakers voiced concerns over the market dominance of tech giant Kakao and its rapid business expansion, from banking to ride-hailing, in recent years.

"As uncertainties about economic recovery persist due to the continued spread of the Covid-19 Delta variant, [the Kospi] fell on worries of regulation against local platform companies," Daishin Securities' Lee Kyoung-min said.

The local currency closed at 1,166.7 won against the dollar, up 8.9 won from the previous session's close.