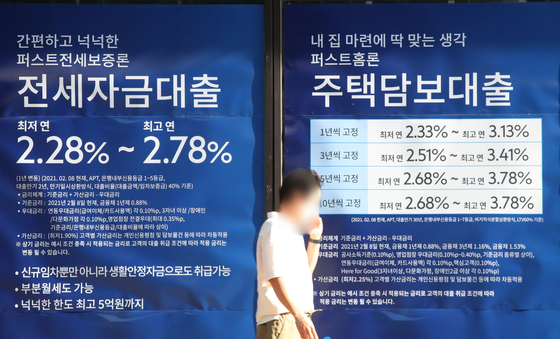 Mortgages and jeonse loan advertised in front of a commercial bank in Seoul on Wednesday. [YONHAP]

Total bank loans to households continued to rise in August, although the rate of increase has fallen compared to previous months as the government pushed banks to reduce lending.

According to the Bank of Korea and the Financial Services Commission Wednesday, the total balance of loans borrowed by household from banks amounts to 1,046.3 trillion won ($897.6 billion), up 6.2 trillion won from a month early.

New mortgages, which account for 95 percent of new loans, remained at a similar level to July, at 5.9 trillion won in August compared to 6 trillion won a month earlier.

The total balance of mortgages as of last month was 764.2 trillion won.

However, there was a significant decline in other loans including unsecured loans, which are borrowed on credit with higher interest rates, as well as those borrowed by putting up deposit accounts and stocks as collateral.

New unsecured loans, excluding those that were paid back within the month, amounted to 300 billion won, a significant drop from 3.6 trillion won in July.

The drop in borrowing comes as the government has been pressuring banks to cut down lending.

NH Nonghyup Bank was the first to announce in late August that it will be no longer be approving fresh mortgages as well as jeonse loans until the end of November, saying that it has already exceeded its annual loan growth target.

The Financial Services Commission earlier this year suggested that banks limit the annual growth of their loans to 5 percent. NH Nonghyup Bank is already at around 7 percent.

Woori Bank followed suite, announcing that it will not issue new jeonse loans until the end of this month.

The government also put pressure on banks to reduce the amount that a person can borrow on unsecured loans.

KakaoBank said it is reducing the maximum amount of such loans from 70 million won to 50 million won.

It wasn’t just banks that have felt the pressure of the government’s tighter grip on loans.

That’s only half of the 5.7 trillion won issued in July.

The FSC said it plans to continue to exert pressure to reduce household debt until the first half of next year.

“There are possibilities that those that have huge loans could be hit,” said Lee Dong-hoon, director of financial policy at the FSC. “We need to tighten our belts and deflate the [debt] balloon.”

The BOK last month raised the key interest rate from 0.5 percent to 0.75 percent. This was the first change the central bank has made in 15 months.

The central bank lowered the interest rate twice since the pandemic started last year. It was lowered from 1.25 percent to 0.75 percent in March 2020 and again dropped to 0.5 percent, which was a new record low, in May that same year.

The interest rate remained unchanged until August this year on fear of record breaking debt and inflation.

Lee said the goal of the financial authority is to prevent another major impact similar to that of past financial crisis.

“Once steps such as tapering or a hike in interest rates start, those that borrowed huge amount to buy apartments will likely be the most impacted,” Lee said. “We are trying to tighten [loans] any way we can, either in the second half of this year or the first half of next year.”

The government in recent months has been trying to cool off the expanding debt including warning of property values falling in coming years. Yet many continued to seek out loans to buy apartments before prices rise further, making it more difficult to buy.

More concerns emerged after the financial authority hinted that it could tighten the rules for loans borrowed to pay jeonse rent.

On Tuesday it was reported that the FSC was planning to include “jeonse loan management” in additional measures on household debt likely to come out after the Chuseok holidays.

When asked if jeonse loans could be excluded from the bank’s annual loan growth target proposed by the government, Finance Minister Hong Nam-ki said it is unlikely on Tuesday while appearing at the National Assembly’s Special Committee on Budget and Accounts.

The FSC on Wednesday said in a press release that no decision has been made related to tightening restrictions on jeonse loans.