Kakao and Naver shares plummeted as one type of financial service they offer was found to violate regulations — and more restrictions on them are possible in the future due to their market dominance.

The act, implemented March 25 and given a six-month grace period, obliges all entities that sell or broker investment products such as funds and insurance register with the FSC. Kakao Pay and Naver Financial didn't register as the companies mainly advertise other financial institutions' products by comparing and recommending different investment options.

Both companies will be prohibited from providing their services to users starting Sept. 25 unless they register. The two services will have to be entirely changed or suspended if they fail to do so.

Having access to a huge user base, big online companies like Kakao and Naver have been introducing various financial products and earning commissions for investments. A big source of business will be taken away from the companies as the grace period for the Financial Consumer Protection Act comes to an end.

More regulations may put brakes on the growth of Naver and Kakao as lawmakers continue to criticize the big platforms. 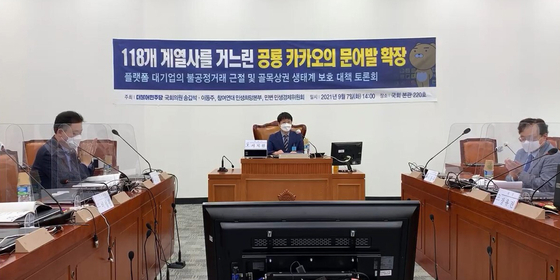 Lawmakers hinted at a thorough probe of Kakao. An investigation led by the National Assembly is slated to start next month.

“Kakao once symbolized innovation and development, but is now no more than a business of greed and outdated practices aiming to maximize its profits by charging high prices to the people,” said Rep. Song. “We will strongly condemn Kakao’s sprawling business expansion during the upcoming National Assembly investigation, seeking a solution for small businesses.”

Kakao’s subsidiary Kakao Mobility has been under fire for issuing a warning to 33 taxi drivers who were found to have recommended their passengers to use other taxi hailing services.

According to Kakao Mobility, the passengers reported the drivers, and recommending other services could be seen as providing an unpleasant experience to its customers. The drivers will be suspended from being registered under Kakao T services if they do it again.