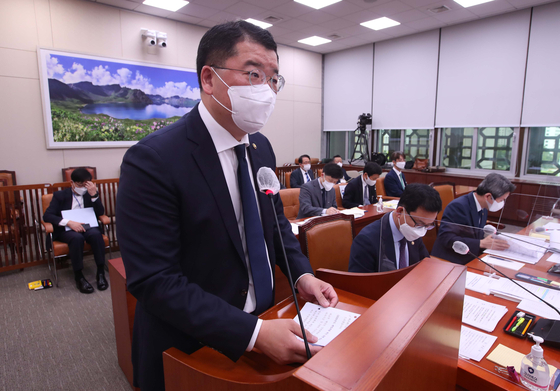 
Asked if he thought North Korea violated agreements signed in 2018 if it restarted the Yongbyon nuclear reactor, First Vice Foreign Minister Choi Jong-kun replied, “No, I don’t think so.”

The question during a National Assembly Foreign Affairs and Unification Committee hearing Tuesday was from People’s Party Rep. Lee Tae-kyu.

“The visible measures that North Korea has taken to follow the agreement of the Panmunjom Declaration and Pyongyang Joint Declaration, such as destruction of a nuclear testing site […] are still in progress,” Choi added.

South Korean President Moon Jae-in and North Korean leader Kim Jong-un met three times in 2018 and signed two agreements, one during their summit in the Panmunjom area in April and another in Pyongyang in September.

Both agreements stressed pledges by the North to denuclearize. While the Yongbyon nuclear reactor is not mentioned in the Panmunjom Declaration, which states that the two Koreas “shared the view that the measures being initiated by North Korea are very meaningful and crucial for the denuclearization of the Korean Peninsula,” the facility is explicitly mentioned in the Pyongyang Declaration.

“The North expressed its willingness to continue to take additional measures, such as the permanent dismantlement of the nuclear facilities in Yongbyon, as the United States takes corresponding measures in accordance with the spirit of the June 12 US-DPRK Joint Statement,” reads the declaration.

The International Atomic Energy Agency (IAEA) reported last month that Pyongyang may have restarted its Yongbyon nuclear complex in July after leaving it dormant for about two and a half years. The complex is able to produce weapons-grade plutonium from spent fuel rods.

According to the IAEA report, there have been indications such as discharges of cooling water at the 5-megawatt reactor at the Yongbyon complex in North Pyongan Province since July. The report’s findings were supported by satellite images of the site analyzed by the U.S.-based monitoring group 38 North.

Asked during the hearing whether he takes the IAEA report as evidence that the North has restarted its nuclear facility, the vice foreign minister answered, “I cannot say here whether I think the IAEA report is correct or not, but we have been monitoring the situation closely through our information channel with the United States.”

The two Koreas restored the hotlines on July 27, after 13 months. Pyongyang pulled the plug again, however, by mid-August, after Seoul and Washington launched a joint summer military exercise.

Unification Minister Lee In-young, also present during the hearing, was asked why the South Korean government did not alert the public about the activities in Yongbyon when it found out.

“We don’t make official announcements of every detail of our discussions with the United States about North Korea,” Lee said Tuesday. “The decision to go ahead with restoring the hotlines was made because it was deemed necessary at the time.”

A Blue House official, in meeting with the press on Tuesday afternoon, said the Blue House “stands with” the statement by Choi, and that it does not see activities at the Yongbyon site as a violation of the inter-Korean agreements.

The statement is an about-face given the previous official positions of the Blue House on the Yongbyon facility.

President Moon admitted the importance of shutting down the Yongbyon facility in the greater scheme of the North’s denuclearization efforts.

“The Yongbyon complex is the mainstay of North Korea’s nuclear facilities,” Moon said during a joint written interview with Yonhap, AFP, AP and three other international news media outlets in June 2019. “If all of the nuclear facilities in the complex, including the plutonium reprocessing facilities and the uranium enrichment facilities, are completely demolished and verified, it would be possible to say that the denuclearization of North Korea has entered an irreversible stage.”

Pyongyang had over several occasions pledged to destroy the Yongbyon facility then walked back its promises.

Yongbyon began operation in 1986. North Korea agreed to shut down the Yongbyon reactor in 2007 and allow UN nuclear inspectors back into country in exchange for aid amid six-party talks with South Korea, China, Japan, Russia and the United States. It blew up the reactor’s cooling tower in 2008 to show its commitment. However, Pyongyang eventually walked away from the negotiating table in 2009.