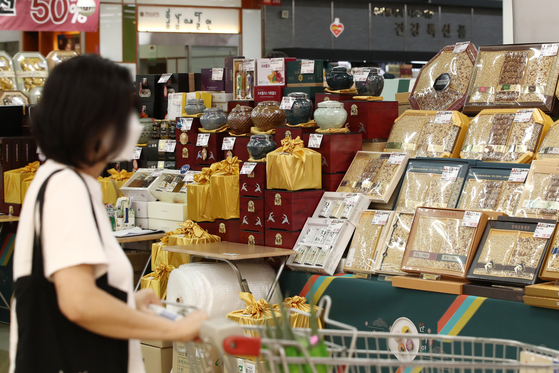 Chuseok gift sets are displayed at a discount mart in Seoul. [YONHAP]


Price ceilings on holiday gifts were temporarily relaxed in the recent past to help the economy, but gift-giving this Chuseok will have to comply with strict anti-graft laws.

Last Chuseok and during the most recent Lunar New Year, public officials were allowed to accept 200,000-won ($170) worth of agricultural, fisheries and livestock gifts. The price cap is normally 100,000 won under an anti-graft law that went into effect in 2016. The cap was relaxed to help farmers, fishermen and small merchants suffering from the effects of the pandemic, social distancing restrictions and the anti-graft rules.

Although many are still suffering, the government is restoring the gift ceiling.

According to a government official, the Anti-Corruption and Civil Rights Commission (ACRC) has no plans to schedule a Whole House Committee meeting, which is necessary to decide whether the price ceiling can be eased this Chuseok.

Minister of Agriculture, Food and Rural Affairs Kim Hyeon-soo recently held a private meeting with ACRC Chairperson Jeon Hyun-Heui to ask that the ceiling be relaxed, but the JoongAng Ilbo reported Jeon turned down the request because “it could ruin the purpose of the law if exceptions are repeatedly made.”

With only few weeks left until Chuseok, which falls on Sept. 21, farmers and livestock producers have pressured the government to raise the ceiling.

“The ACRC is failing to notice that farmers are suffering because some average people are also abiding by the gift price ceiling, even though the anti-graft law is only applicable to public servants,” read a statement released by the Hanwoo Association on Aug. 25.

An association of mayors from agriculture and fishery regions announced Aug. 29 that it asked the government to lift the ceiling for gift prices during this Chuseok.

Although the ceiling will be in effect, the ACRC announced Wednesday that the government will do its best to clarify the anti-graft law. Posters and notices specifying that the anti-graft law doesn't apply to normal people, but only to civil servants, will be posted in train stations, airports and highway rest stops through the Chuseok holidays.

August was the fifth consecutive month in which consumer price rose more than 2 percent. Agriculture, livestock and fishery prices are leading the rise, with Korean hanwoo beef — one of the most popular Chuseok gifts — rising 7.5 percent on year last month. Pork prices rose 11 percent.

“If we increase the ceiling ahead of Chuseok, the demand for expensive gifts will rise,” said another government official. “It could be difficult to tame inflation if prices of popular gift sets such as fruits and meat rise when stimulus payments start to flow in.”

From beef stew to champagne, hotels unveil their Chuseok offerings

Spam gift set again for Chuseok? Instead, buy a yacht from CU.