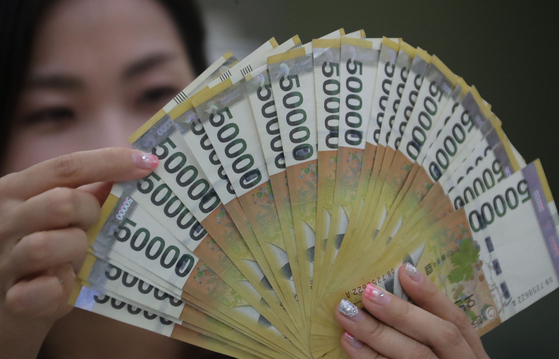 Piles of 50,000 won note at a bank in Korea. The Korean government has continued to collect more taxes in the first seven months compared to the same period a year ago. But spending have been larger as Covid-19 continues. [YONHAP]

The government’s tax collection increased during the first seven months of the year as continuing economic recovery and rising real estate prices pushed up spending.

However, as the cost of the Covid-19 pandemic continues to grow, the country continued to report a deficit.

According to the Finance Minister on Thursday, between January and July the government collected 223.7 trillion won ($191 billion) in taxes.

Income tax saw the biggest jump, increasing 45.8 percent, or 22 trillion won, year-on-year in the first seven months compared to the same period last year for a total of 71.4 trillion won.

Corporate taxes in the first seven month amounted to 41.7 trillion won, 10.9 trillion won more than a year ago, up 35 percent.

Value-added tax applied on consumption of services and goods amounted to 57.3 trillion won, 9 trillion won more than a year ago, 18.6 percent increase.

With the income generated from funds including the national pension, the total government income between January and July amounted to 356.9 trillion won, 76.5 trillion won more than the same period in 2020, or a 27 percent increase.

Yet the deficit remained as the government increased spending as the impact of Covid-19 continues.

When excluding social securities including the national health insurance and pension, the deficit amounts to 56.9 trillion won.

While Korea’s exporters have been enjoying an exceptional year, the domestic market is struggling, especially since another spike in the number of people infected with Covid-19 has began in July.

Korea enjoyed a surplus on its balance sheet between 2010 and 2018, with the sole exception of 2015, when it suffered a deficit of 200 billion won.


National debt excluding that owed by local government or public institutions for the first time exceeded 900 trillion won in July.

However, the government emphasized that the fiscal balance is improving despite the aggressive fiscal policies, thanks to the economic recovery resulting in larger taxes.

“The execution of [this year’s] second supplementary budget in the second half will help economic recovery and we will work hard to provide support to those that are most affected, including small shop owners,” said Vice Finance Minister Ahn Do-geol.