Stocks down amid virus concerns and expiration uncertainties

Stocks down amid virus concerns and expiration uncertainties 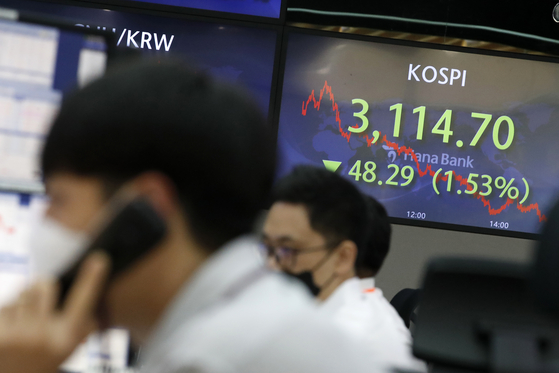 A screen in Hana Bank's trading room in central Seoul shows the Kospi closing at 3,114.7 points on Thursday, down 48.29 points, or 1.53 percent, from the previous trading day. [NEWS1]


The key stock index tumbled more than 1.5 percent Thursday amid virus concerns and uncertainties from the expiration of options and futures. The won fell against the dollar.

The Kospi opened sharply lower as Korea's daily coronavirus cases remained in the 2,000s for the second straight day Thursday despite the highest level of virus curbs in most parts of the country.

Health authorities warned new infections may further increase ahead of the Chuseok holiday, which, including the weekend, runs from Sept. 18-22 this year. Millions normally travel across the country for family gatherings over the autumn harvest holiday.

Stock prices partially fell from the influence of the quadruple expiration of futures and options.

"Uncertainties from the expiration day for stock options seem to have stretched the Kospi's losses, particularly driving down most of the large caps," Mirae Asset Securities analyst Park Gwang-nam said.

Internet portal operator Naver retreated 2.56 percent to 399,000 won, and its rival Kakao plummeted 7.22 percent to 128,500 won in the wake of the ruling Democratic Party lawmakers' criticism over the market dominance of giant platform businesses.

The local currency closed at 1,169.2 won against the dollar, up 2.5 won from the previous session's close.