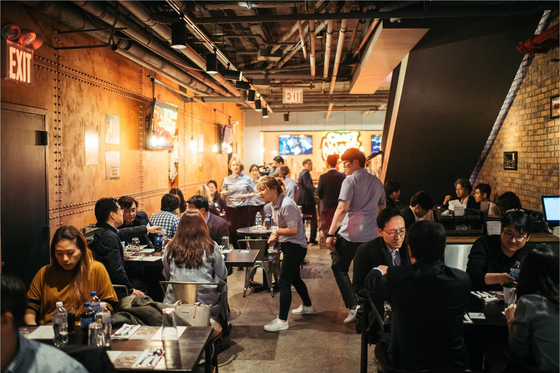 The ranking, conducted and published by Nation’s Restaurant News in July, was based on on-year growth of a number of new stores that opened in the United States last year.

There are 97 BB.Q Chicken stores in the United States as of this month, with 50 more to open later this year. The brand is available in 15 states including New York, California, Texas and Illinois.

In the rankings, BB.Q Chicken was behind Crumbl Cookies, Sam’s Restaurant, Wahlburgers and Sharetea.

It was the only Korean franchise on the list, according to Genesis BBQ.

The company said that a rise in demand for food delivery since the Covid-19 outbreak last year helped raise demand for its chicken.

“Pizza was the most common type of food delivered in the United States, but not chicken,” said Lee Chang-hwan, a spokesperson for Genesis BBQ. “People seem to have found the idea of getting chicken delivered very refreshing.”

He said sauced chicken, including soy-garlic and honey-butter flavors, are popular in the United States.

Genesis BBQ plans to open a type of a store that only serves takeout and delivery.

Such stores are more affordable because they're smaller and require fewer workers.

In a separate evaluation by Nation’s Restaurant News in July, BB.Q Chicken ranked 375th in terms of on-year sales growth in 2020.

The company's U.S. unit reported $54.2 million in sales last year. It could not confirm 2019 sales as of reporting time.

“The announcement by Nation’s Restaurant News is very meaningful and we believe it is the outcome of our endless efforts since we entered the U.S. market in 2006,” said a spokesperson for Genesis BBQ in a statement. “Our goal is to open 50,000 stores under the franchise worldwide by 2025.”

Genesis BBQ started business outside Korea in 2003 in China and in the United States in 2006.

It operates in 57 countries.