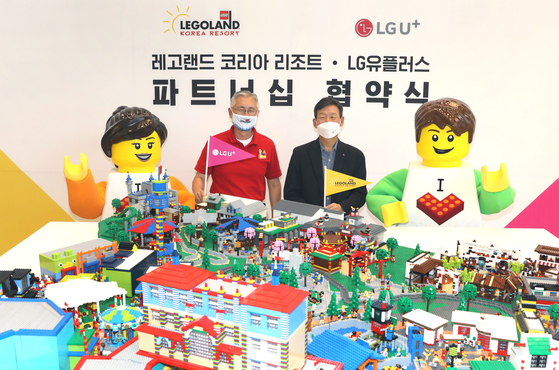 
LG U+ signed a partnership agreement with Legoland Korea Resort on Thursday, with plans to offer its high-speed internet, augmented reality (AR) services and more to the theme park visitors.

Legoland Korea is a theme park set to open in Chuncheon, Gangwon, in the first half of next year. The amusement park will feature Lego-themed rides and have a hotel and movie theater.

LG U+ will provide its high-speed internet and IPTV access at Legoland Korea.

The mobile carrier will also develop AR content specialized for the park. Visitors will be able to view virtual AR content when turning on their smartphones at certain areas of Miniland, a section at Legoland that will showcase worldwide travel attractions built using Lego bricks on a miniature scale.

So-called smart benches developed by LG U+ will also be installed, offering wireless smartphone charging and Wi-Fi connections. It will also utilize its online-to-offline network to create an electronic wristband that allows visitors to rent strollers by simply tagging the wristband to a rental station.

According to the company, the partnership will allow LG U+ to target younger customers, who are prominent visitors to amusement parks. The mobile carrier recently invested in studios specializing in children’s animations such as Dream Factory Studio and Monster Studio to expand its range of kid's TV programs on its IPTV.

Customers subscribed to LG U+ plans will be able to receive up to a 20 percent discount on Legoland tickets.

LG U+ to turn Yeosu Industrial Complex into a smart factory