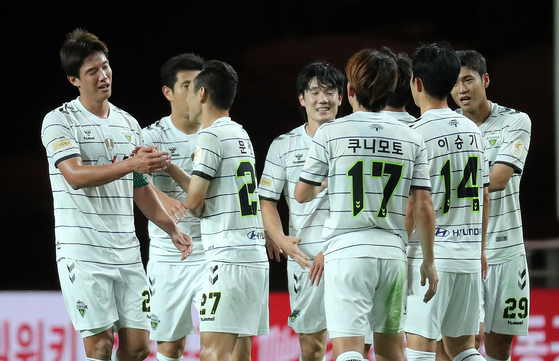 
The K League 1 returns from the international break this week with six matches including a showdown between Ulsan Hyundai and Jeonbuk Hyundai Motors, the two teams vying for the K League championship title.

Ulsan and Jeonbuk, the top two teams in the league, will face off for the third time this season.

Ulsan will have the home advantage this time, as well as the advantage in rankings and recent form. Ulsan is riding a three-game winning streak, having gone undefeated for the last seven games straight. They have been showing a strong offense, scoring at least two goals in the last six matches. In their latest match, Ulsan defeated Incheon United 3-2 on Aug. 29.

Jeonbuk, on the other hand, is struggling to defend their K League championship title. The club is Korean football royalty with eight of the last K League titles to their name, but this year the club has struggled to live up to that reputation.

Going into the Ulsan match, Jeonbuk has a record of two wins, two draws and one loss in their past five games. The last two times that Jeonbuk faced Ulsan, Jeonbuk was unable to figure out their opponent, losing 4-2 in May 19 and drawing 0-0 in April 21.

Last week’s 4-3 win against FC Seoul may have put Jeonbuk back on track. Despite a sloppy defense that led to an own goal, Jeonbuk bounced back to take three points.

The big showdown starts at 7:30 p.m. on Friday at Ulsan Munsu Football Stadium in Ulsan. Jeonbuk will be looking for their first win against Ulsan this season. After playing 27 games each, Jeonbuk is four short of Ulsan’s 54 points.