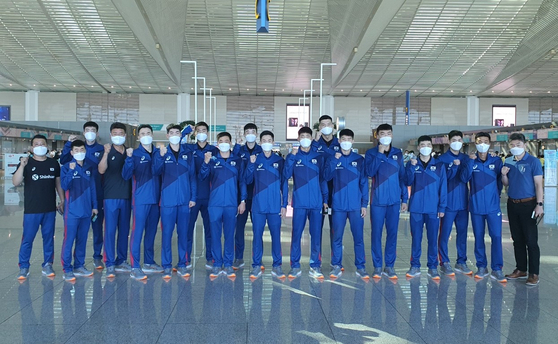 
The Korea Armed Forces Athletic Corps volleyball team flew to Japan on Wednesday for the 21st Asian Senior Volleyball Championship hosted by the Asian Volleyball Confederation that starts on Sunday.

The Korea Armed Forces Athletic Corps were dispatched to represent Korea on the international stage instead of the men's national volleyball team because all athletes of the Corps team are fully vaccinated.

The team has trained for the tournament for three weeks from Aug. 22 in Mungyeong, North Gyeongsang.

Before training for the Asian Championship, the team joined the seven other men's V League teams in vying for the KOVO Cup.

The Corps put up a good fight against stronger teams, winning their first match against the KB Insurance Stars 3-1 and then beating the Seoul Woori Card Wibees 3-2 after a prolonged fifth set. The Corps dropped out of their third match, losing against Incheon Korean Air Jumbos 3-1.

Korea qualified for the event at the 2019 Asian Men's Volleyball Championship in Tehran, Iran, taking fourth place. Korea is placed in Pool D alongside Taiwan, Kazakhstan and Saudi Arabia.