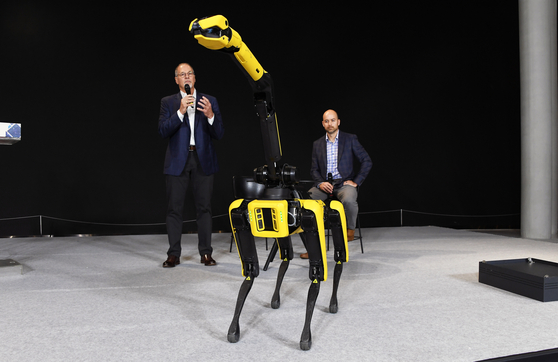 
"We think Hyundai's expertise in manufacturing and supply chain operations will be a major benefit to Boston Dynamics as we continue to grow and drive scale throughout our business."

Boston Dynamics was founded as a spinoff company from Massachusetts Institute of Technology in 1992 and was acquired by Google in 2013 and SoftBank Group in 2017.

The company is an industry leader in robot technology but hasn't been profitable in the last few years. It recorded a net loss of $103 billion in the fiscal year that ended in March 2020.

Nonetheless, Hyundai Motor last year acquired a controlling 80 percent stake of the robotics company in a deal that valued Boston Dynamics at $1.1 billion. The deal came to completion in June.

"Revenue has increased and we expect it to grow aggressively," Playter said. "Sales of Spot will be significantly higher than last year. I won't hypothesize exactly when we will reach the break even point. At least with two products in the market, we think we can achieve financial success." 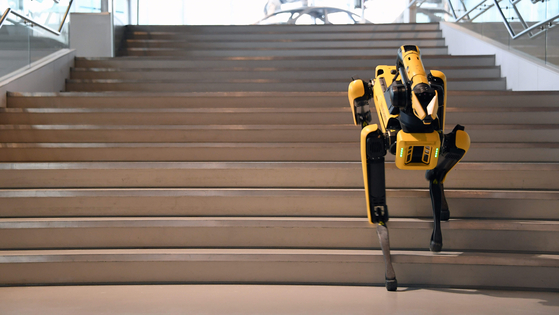 Four-legged Spot climbs up the stairs during a demonstration on Sept. 10. [HYUNDAI MOTOR]


Spot is a four-legged robot designed to navigate terrain with the autonomous manipulation of its legs. Stretch is designed to work in warehouses. Atlas is a humanoid robot which is able to walk and make gestures similar to humans.

Spot launched last year and Stretch is slated for launch next year.

The soon-to-launch Stretch, which will be used for unloading cargo from trucks and containers, is expected to have bigger potential in collaboration with Hyundai Motor, Playter says.

"We think [the] Hyundai team can help us extend our early use cases [of the Stretch robot] like truck unloading to other warehouse automation into eventually a full end-to-end solution for the smart logistics industry," Playter said.

The two-legged humanoid Atlas is able to express emotions through gestures, considered one of its most important aspects because it enables communication with humans.

Boston Dynamics robots will concentrate on industrial jobs for the time being and their prices will stay at their current levels, according to the company's chief technology officer Aaron Saunders.

"We are not focused on consumer-level robots," he said. "Developing a robot that's $1,000 is a very challenging task. It is possible but it will take time."

"We want to focus on sophisticated functionality and go from there."

At the moment, Boston Dynamics robots are designed specifically for industrial purposes and they are pricey. Spot, for example, costs $74,500 per unit.

When asked about the recent unveiling of Tesla's humanoid robot, the Tesla Bot, Playter said he is excited.

"We are excited to see new entrants because it validates the potential value of new breeds of robots in the industry," Playter said. "Boston Dynamics has spent decades developing the fundamental technology in balancing and manipulating to make them work in [the] real world. We will not slow down and with [the] power of Hyundai, we expect to accelerate."