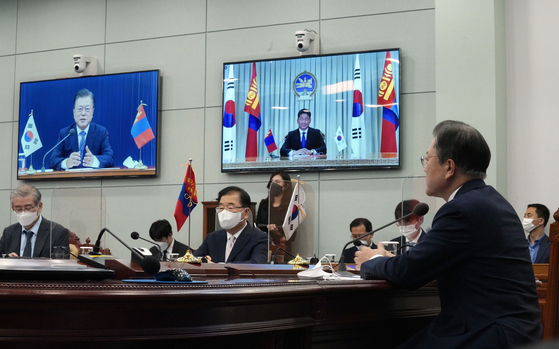 The two sides adopted a joint declaration for a strategic partnership to elevate bilateral relations in a future-oriented manner to enable the Asian countries to further contribute to regional "peace, stability and prosperity." They will also deepen and expand cooperation in five areas: politics and security; economy, trade and investment; education, science and technology, environment and health; culture, tourism and people-to-people exchanges; and regional and international matters.

Moon said that Mongolia is a key partner to Korea in the New Northern Policy, his administration's initiative to establish stronger economic cooperation with the Russian Far East, Northeast Asia and Eurasia, which also has "synergy" with the Mongolian government's Vision 2050 long-term national development policy adopted last year.

Moon highlighted the potential for more "substantive" partnership in fields such as eco-friendly investment and distribution of minerals to "achieve joint prosperity through new cooperation."

The president conveyed that "Korea, a high-tech powerhouse, and Mongolia, one of top 10 resource-rich countries in the world, have great potential for substantive cooperation utilizing complementary economic relations," according to the Blue House. He called for ways to expand mutual cooperation in green energy and other eco-friendly industries.

The two leaders further shared that overcoming Covid-19 and responding to climate change is a common challenge for both countries, and agreed to actively cooperate in the areas of health, medical care and environment, and science and technology.

They also agreed to support Korean companies to participate in supplying energy, developing smart cities and establishing distribution and logistics systems in Mongolia.

Mongolia, a country that has diplomatic relations with North Korea dating back to 1948, has been a steadfast supporter on Korean Peninsula affairs. It has also proactively supported the Moon administration's Northeast Asia Cooperation Initiative for Infectious Disease Control and Public Health as a response to the pandemic. The two sides also agreed to respond to air pollution on a regional level.

The two leaders agreed to work closely together on the regional and international arena so that the two countries could contribute "not only to regional prosperity and stability but to global peace" as strategic partners.

Korea and Mongolia celebrated their 30th anniversary of relations in 2020, designated as the "Year of Korea-Mongolia Friendship," and continued various exchanges despite the pandemic.

Moon and Khurelsukh also shared the view that the "human bond" between the two countries through history and culture has served as an important foundation for the development of bilateral relations. They agreed to further expand cultural and human exchanges to enhance mutual understanding, especially among the youth.

More than 200,000 people traveled between the two countries annually before the pandemic.