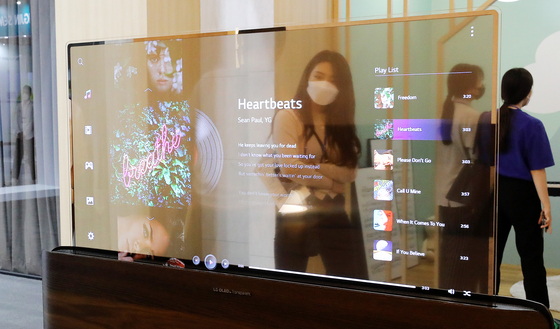 LG Display's transparent OLED screen is on display at IMID 2021, a display exhibition held at COEX on Aug. 25. [NEWS1]


Korean tech giants Samsung and LG are taking a leaf from each other's books to expand their standing in the organic light emitting display (OLED) as price-cutting Chinese manufacturers continue to push into the premium display market.

Samsung Electronics has long distanced itself from OLED TVs, although Samsung Display is a major producer of the small-and-medium sized OLED panels used for smartphones and tablets.

But that stance could shift as Samsung Display, a major display supplier to Samsung Electronics, is set to produce large-sized OLED panels called quantum dot displays within the final quarter of this year.

The belated entry into the OLED TV market appeared to be somewhat inevitable given that Chinese competitors like BOE and Xiaomi threaten Samsung’s dominance in the liquid crystal display (LCD) TV market, a mainstream and cheaper option preceding OLED.

“It could be a strategic mishap if Samsung continues to count on LCD and avoid OLED at a time when the Chinese companies mount an aggressive challenge in the LCD market,” the source said. “So, the OLED entry is kind of a natural path for Samsung, although it is quite late."

LG Display, the world’s only maker of large OLED panels for TVs, is trying to ramp up its investment and production of small-and-medium sized OLEDs.

LG Display announced in August that it will invest 3.3 trillion won ($2.9 billion) over three years to build a new production line for smaller OLED panels in Paju, Gyeonggi.


Two weeks after the announcement, the display supplier pledged $1.4 billion of investment in Vietnam to expand production of organic light-emitting diode (OLED) displays, which will be used in both TVs and smartphones.


The company, which supplies screens to Apple for iPhones, will expand an existing plant in the northern port city of Hai Phong.

“Some say that LG’s entry into the smaller OLED screen market is late, but we still have the potential to win customers given the technologies and production capacity we have,” said a source at LG Display.

The investment, sources say, is intended to serve Apple.

“LG Display has earned trust from Apple through its performance of supplying OLED panels in a stable manner,” said a source in the display industry. “The decision is considered rational given that Apple will likely adopt OLEDs in the upcoming iPhone series, iPads and even Apple Car.”

The rising demand will translate into a bigger market for small-and-medium sized OLEDs.

Korea Display Industry Association estimated that the figure will grow to $39 billion by 2024 from $26 billion in 2020.


Samsung Display had a market share of 82.1 percent as of June, according to market tracker Omdia. LG Display claims a 7.5 percent share.

The market for large-sized OLED display will also rise to $7.5 billion in 2024 from $4.2 billion last year.

“The transition toward OLED is inevitable in the mid to long term because the dramatic rise of LCD prices will come to a stop this year,” said Kim Kwang-jin, an analyst at Yuanta Securities.

Chinese companies are catching up quickly.

Samsung Display’s market share on small-and-mid-sized OLEDs went from 93.3 percent in 2018 to 73 percent in the second quarter, according to UBI Research, a local research firm focusing on displays. The is projected to further dip below the 60 percent range next year due to the rise of Chinese companies.

“The OLED smartphone industry itself is moving to China,” said Yi Choong-hoon, head of UBI Research. “BOE will gradually increase its share, but not dramatically."