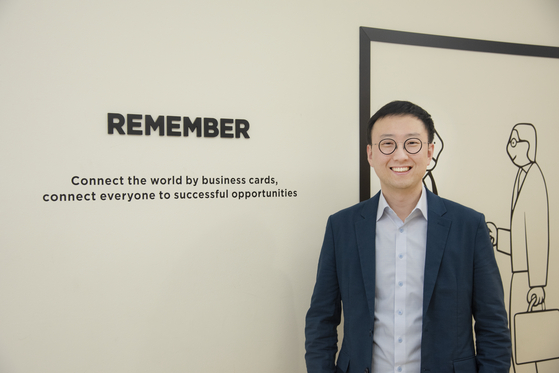 
Starting as a business card managing application, Remember is now aiming to grow into a business portal that every employee uses.

Drama & Company launched the Remember application in 2014 as a service that digitally organizes business cards. Simply taking a photo of a card automatically turns the necessary information, such as the company name, email and phone number, into organized text.

After the application's launch, the company added a "Remember Career" tab to offer job searching services and "Remember Community," an anonymous chat forum for employees.

The company plans to further expand its business, even tapping into advertising and marketing.

Rapidly expanding its business, Drama & Company has accumulated 40 billion won ($34 million) in investment. Online portal operator Naver owns a 40.62 percent stake in the company, and Line Plus owns 40.59 percent. Although Choi said “nothing is decided,” private equity firm Ark & Partners was reportedly planning to make an investment worth some 100 billion won, evaluating that the company has high potential to grow into a business portal.

Choi recently talked with the JoongAng Ilbo about his journey with the app and his future plans. The following are edited excerpts from the interview.


Q. Why did you start as a business card managing application?

A. When I used to work as a consultant, I went on a lot of business trips to the United States. Everyone I met there used LinkedIn. It was interesting how people would upload their profiles, get in touch with each other, search for jobs and ask questions to others. At that time, over 80 percent of the United States’ economically active population used LinkedIn, but, oddly, it didn’t do so well in Korea. It was undeniably a necessary service for employees, so I wanted to take a different approach in a Korean context, which was a business card application.

Uploading your personal career history on an open platform feels odd in our culture. So we decided to help employees manage their business cards, which are an inconvenience to many.


Starting as a business card application, you added various features. Why?


Our ultimate goal is to become a business portal that helps solve all problems related to employees. We used the business card organizing service to create a user base that will help us become such a platform.


What market does a business portal target?

It’s basically a game of who attracts the most people. One businessman can be seen in many different ways. Think about a general affairs manager. In the eye of recruiters, that person is a potential employee they can scout. For salespersons, that person is a potential buyer of their company’s products. The person is also an expert with knowledge in a field. A business portal needs to figure out those different aspects and connect users with the right people. It’s also the market that LinkedIn is targeting in the United States and other global markets.


Can you go into more detail?

There are endless areas that a business portal can expand into, such as providing services for recruiting and career changing, being an online community forum, education, targeted advertisements, conducting market research and providing marketing solutions.


How big is the market size?

Currently, the local market is valued at 5 trillion won, and it could be over 10 trillion won if it grows. Unlike the past, many people are switching jobs, and there are lot of opportunities there. According to our research, people who have worked for 10 years were found to have changed companies about three times on average. People are less reluctant toward career changes.


Aren’t there other big players in the recruitment services industry?

Trends within the local job searching market are changing. Rather than an open recruitment system in which companies would hire thousands of new recruits, companies are searching for experienced hires only when the occasion calls for new employees. Big companies like Hyundai Motors and LG Group stopped their open recruitment process. Offering a job board service that effectively displays a bunch of information on job announcements was better when companies hired through open recruitment. Now, it's better to offer services that connect various talent to specific companies.


How is Remember Career different from existing head-hunting and recruitment services?

The best employees in the business are gathered there. Over 800,000 people have listed their profiles, including those in various fields such as finance, accounting, sales and marketing. There are also a lot of people who have lots of work experience. Over 6,000 directors and executives of big companies are registered. Division chiefs and heads make up for 65 percent of the users, and we have people such as professors and doctors who are hard to find on other career platforms.


How often do they use the service?

Over 1 million job recruiting offers were sent during the one-year and six-month period since the launch. That's a big number considering there were 928,984 people who switched jobs last year, according to the Ministry of Employment and Labor. A lot of offers means that the service is something that people really wanted.

Some still feel betrayed by people who change companies. So we added a distinct feature in which people can block their company’s human resources team from viewing their profiles. A user can also select to block other company employees if they want to. People can assess their value without upsetting their current company.


There are a lot of anonymous online community services. Why did you launch a similar one?

It was necessary to achieve our goal to become a business portal. All of the necessary work-related information needs to be accessible on a business portal: In other words, it should be a platform that people always go to when they’re at work. To do so, we needed a service in which employees can ask each other questions and exchange information. It’s almost like a Q. and A. service for workers.


Some have negative feelings toward anonymous online community forums for business employees.

We’re a bit different. People register their business cards on a different section of the application, and they are less likely to act aggressive toward other users. It's more welcoming and respectful. Even though it's an anonymous service, it almost feels like you’re wearing a tie. Most of the people also use honorifics. That's why even start-up CEOs host special events on the platform.


What sort of events?

Earlier this year, Viva Republica CEO Lee Seung-gun uploaded an ask-me-anything [AMA] post to Remember Community. The post read that the company was hiring, and said people who were interested were free to ask questions. Some 170 comments were made, with questions ranging from working conditions to the company’s future plans.


You must have acquired various data by operating many services.

That’s our strength. Our competitiveness is that the business cards function differentiates us from other platforms that only know users’ age or gender. We even know what the person does.


What different services can you provide?

We recently launched a survey service, which conducts market research. One manufacturing company asked us to conduct a poll on 400 executives and vice presidents, and we were able to finish in just nine days. It only took us five days to conduct a survey of 100 employees in manager positions and above. Survey companies needed to get pollsters and request people to take surveys on the streets, but we can do the same in a more credible way, within a short period of time, online. We can also designate target advertisements. If a company that sells chairs wants to make an advertisement, we can send out targeted ads to general affairs employees.