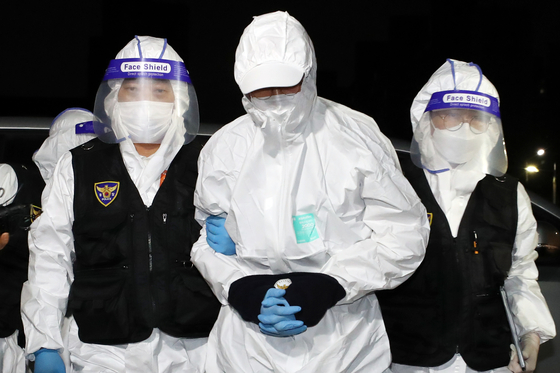 Moon Heung-sik, the man in charge of a botched demolition project that resulted in the deaths of nine people, is arrested upon his return to Korea on Saturday afternoon, after fleeing to the U.S. [YONHAP]


The man in charge of the botched demolition of a five-story building in Gwangju in June was arrested on Saturday upon his return to Korea, three months after fleeing to the United States.

Moon Heung-sik is accused of illegal activities in the tender selection process for the demolition contract and interfering in subcontracting for the real estate redevelopment in Hak-dong of Dong District, Gwangju, where the building under demolition collapsed on June 9 — killing nine people and seriously injuring eight others.

The Gwangju Metropolitan Police Agency said on Sunday that it is investigating Moon and will request an arrest warrant within 48 hours.

The police arrested Moon upon his arrival at Incheon International Airport at 6:10 p.m. on Saturday.

Moon was previously booked without detention on suspicion of interfering in the selection process on June 14, five days after the incident, but fled to Seattle before he was set to face questioning.

Police confiscated Moon's possessions such as his cell phone and bankbook immediately after his arrest, and sent him to Gwangju Seobu Police Station in protective clothing and a mask to prevent the spread of the coronavirus. Moon later tested negative for Covid-19.

With Moon's arrest, police have booked and are investigating a total of 18 people including one accomplice broker who has been charged with professional malpractice and bribery resulting in death.

“Other suspects, including union officials, have been charged with crimes such as professional malpractice and bribery, but Moon is currently being investigated with only one charge of violating the Attorney-at-Law Act,” a police official said.

“All nine people sent to the prosecution on charges of professional negligence resulting in death have been indicted, and other suspicions of corruption in the redevelopment project and bribery are currently being investigated,” the official added.