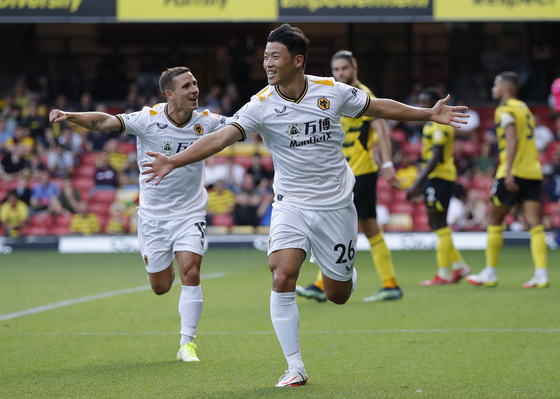 Hwang Hee-chan celebrates scoring in his debut appearance for Wolverhampton Wanderers at Vicarage Road in Watford, England on Saturday. [REUTERS/YONHAP]


Hwang Hee-chan's first day at work couldn't have gone much better — the Wolverhampton Wanderers' striker came on in the 63rd minute and 20 minutes later scored to lock in the club's first win of the 2021-22 season.

Wolves walked away with a 2-0 win over Watford, following an own goal in the 74th minute. Hwang's contribution was thanks to a goal-mouth scramble rather than the stunner from outside the box he might have dreamed of, but it was still a goal and that's what Wolves needed.

“It was very good for him, but the way he came for us, that was my feeling from the first day," Wolves manager Bruno Lage said after the game "I heard every time good things about Wolves, about the way that the people received the staff and the players, the way the staff received the young players, everything was about it being a good environment.

"It happened to me when I arrived three months ago and it happened with him. He was welcomed because he is a good player and he is a top player and it is important for us to have this kind of player. For me as a manager that’s what I say every time, we need these top players to manage the game the way we want to play."

Hwang had very little time to train after returning from international duty. He arrived in England on Thursday, joined the club for just 30 minutes of training and then spent Friday being caught up on plays and attacking plans ahead of Saturday's game.

“On Thursday he just trained for 30 minutes because of the flight," Lage said. "Yesterday we prepared the game and he saw videos of the good things we did in attack, the good things that we did in our defending, the way we press. It’s good for him to start with a goal. He needs to continue giving what he did today.”

Hwang joined Wolves at the end of August on loan for the entirety of the 2021-22 season, with the club reportedly maintaining the option to buy Hwang for £12 million ($16.6 million).

[VIDEO] All you need to know: Korea v Portugal