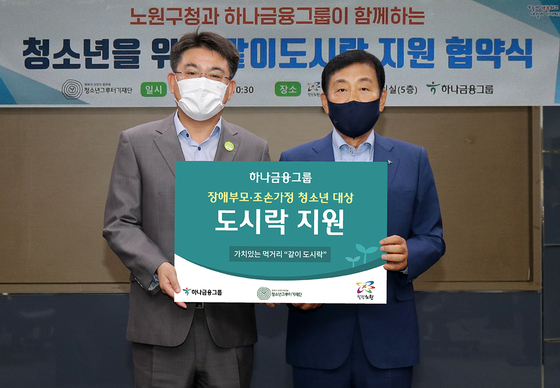 Kim Jung-tai, chairman of Hana Financial Group and the group's Stump Foundation for Youth, right, pose for a photo with Nowon District Mayor Oh Seung-rok after inking a partnership on Monday to cooperate on a social responsibility project to give out lunchboxes to teenagers living with a parent with a disability or those raised by their grandparents. [HANA FINANCIAL GROUP]


Hana Financial Group will distribute lunchboxes to teenagers living with a parent with a disability or those raised by their grandparents as part of its social responsibility program, it announced Monday.

The financial group inked partnerships with the district offices of Nowon and Eunpyeong District in northern Seoul on Monday for the lunchbox distribution project due to kick off Thursday. It will also sign a partnership with Guro District, western Seoul, on Tuesday for the same project.

The group will deliver lunchboxes for three to four people once a week to the selected households, through its nonprofit foundation for young people, dubbed the Stump Foundation for Youth, founded in June. The project will run through June 30 next year.

The lunchbox project is the foundation's first project. The second project, according to the financial group, will be an educational mentoring program for teenagers.