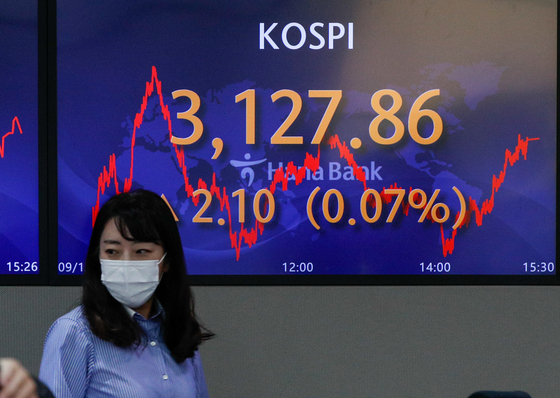 A screen in Hana Bank's trading room in central Seoul shows the Kospi closing at 3,127.86 points on Monday, up 2.1 points, or 0.07 percent, from the previous trading day. [NEWS1]


Stocks edged up after choppy trading Monday as investors remained cautious after a fall on Wall Street last week amid concerns about rising inflation. The won fell against the dollar.

Stocks got off to a slow start after North Korea's state media reported earlier in the day that Pyongyang had successfully test-fired a new type of long-range cruise missile over the weekend.

The Dow Jones Industrial Average closed down 0.78 percent in the previous session, with the tech-heavy Nasdaq Composite and the S&P 500 dipping 0.87 percent and 0.77 percent, respectively.

After a choppy session, the Kospi rebounded on foreign and institutional buying.

"Investors seem to be testing the waters ahead of the Federal Open Market Committee meeting next week," said Mirae Asset Securities analyst Park Gwang-nam. "Until then, political issues may play out [in the stock markets]."

Tech and steel closed higher in Seoul, while most other market heavyweights slumped.

Kakao and its subsidiaries lost amid a political move to regulate unfair business practices in platform businesses. Kakao plunged 4.23 percent to 124,500 won, and KakaoBank tumbled 6.24 percent to 64,600 won, the lowest closing since its listing early last month.

The local currency closed at 1,176 won against the dollar, up 6.9 won from the previous session's close.