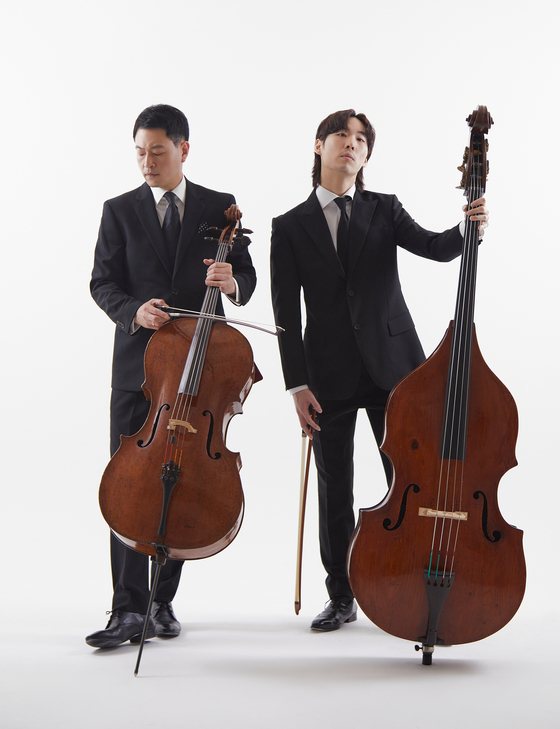 
The cello and the double bass are the two largest instruments in the string family. They are often referred as brother instruments and usually sit closest to each other in an orchestra. Both boast beautiful low-pitched tunes, but for that same reason, the two are rarely paired as a duo.

“I don’t think I’ve ever seen a professional duo concert of a certain size for a cello and a double bass,” said Sung Min-je, a 31-year-old Korean double bassist, who has been taking the lead in bringing the grand instrument to the center stage in Korea, spotlighting it as a solo instrument.

As a longtime fan of late Argentinian composer Astor Piazzolla (1921-92), Sung decided to organize a concert to celebrate the centenary of his birth, but wanted to do it together with a cello — an unexpected combination that has raised the eyebrows of not only aficionados of classical music but also fans of tango and even Piazzolla.

Strange arrangements seen in Piazzolla’s music have earned the composer nicknames like “Little Lucifer” and "traitor," for breaking tradition and taking tango off the dance floor and into the conservatory. But for the upcoming duo concert that pays homage to this "traitor," Sung had to have Piazzolla’s original scores rearranged for double bass and cello. For the cello, Sung says he did not hesitate and went straight to cellist Song Young-hoon.

“When I was a young boy who just started learning the instrument, I got to listen to one of Song’s Piazzolla albums,” said Sung. “I just fell in love with it and was amazed at how this low-pitched instrument, which is a similar instrument to what I was learning, could play such exciting music. Though he’s a cellist, I practiced my contrabass hoping to play my instrument like him one day.”

Sung’s childhood dream not only turned into a reality but even went a step further — performing Piazzolla with Song.

It’s difficult to book a concert with Song, as the cellist is usually outside the country during this time of the year to perform at different festivals across the world. But because of the pandemic, Song has been in Korea, managing a busy schedule here instead.

“I’m hesitant to say this as we are still in a pandemic, but my schedule until the end of the year is fully booked,” said Song. “I have a performance to give almost once every three days until the year's end. But I couldn’t miss this chance to perform together with Sung for this unique duo concert that pays homage to one of my favorite composers.”

The duo’s upcoming concert is titled “Nightclub.” It will be staged at the Lotte Concert Hall on Sept. 15 with socially distanced seating. Prior to the concert, the Korea JoongAng Daily met with the two artists for an interview. The following are edited excerpts.


What’s the intention behind organizing a double bass and a cello duo concert?

Sung: This year marks the centenary of Piazzolla’s birth so the world will be celebrating his music with various festivals and concerts. As a fan of Piazzolla, I first wanted to introduce his music to Koreans, not only the well-known pieces but pieces that have never been performed here before, like his “Soledad.” It’s a rare piece, probably never performed in Korea before as far as I know. But it’s such a great piece. As for partnering with Song, I always thought I would ask him when I got to do a concert on Piazzolla. He not only has released three albums on the composer, but has been known as a great fan of Piazzolla. But above all, I couldn't forget the first time I heard him play Piazzolla on his cello. I just know how much he loves Piazzolla and together with him, I thought we could really celebrate the composer to the fullest and at the same time, provide the audience with a new style of Piazzolla performed by two large string instruments.

Song: As a fan of Piazzolla who thought outside the boundaries, we wanted to try something outside the original format, which would be a bandoneon quintet. We wanted to offer Piazzolla’s music from a new angle that’s more befitting to this day and age. Like the composer’s nuevo tango was so innovative and just so new back in his time, our combination and our interpretation of Piazzolla’s music may sound very unfamiliar. But it will be such a special way to commemorate Piazzolla, who had even received death threats from his fellow Argentinians for breaking traditions.

I know it’s a concert for Piazzolla, but the program has nothing but Piazzolla. This is quite rare too, isn’t it?

Sung: It’s all Piazzolla from the beginning to the end. You’re right. It’s not common to have a concert that only fills up its program with scores from just one composer, even if it's a concert dedicated to that specific composer. Usually, other classical composers like Brahms would be added to the program for a concert like this one so that it’s “easy on the ears,” if you know what I mean. But we took a brave move to fill it up with only Piazzolla’s music from the beginning to the end. Even the encore will be Piazzolla.

The first and the second part of the concert will also be distinctively different. Song and I will perform solo with other accompaniments like the piano, a harp, or a countertenor. Then in the second half, we come together and perform together with a band accompanying us.

Song: We were able to take such a brave move because many of the pieces in fact won’t sound like Piazzolla's. Like we said earlier, many of his pieces have been reinterpreted so that Piazzolla’s music can be celebrated in a different, refreshing way. Piazzolla was a composer who revolutionized traditional tango into a new style termed nuevo tango, incorporating elements from jazz and classical music. In some sense, we are adding another “nuevo” to the existing “nuevo tango.”


Do you mean, if Piazzolla’s fans come to the concert, they will encounter a new style of Piazzolla’s nuevo tango?


Song: I personally think it’s a lot lighter than Piazzolla's nuevo tango. I think the reinterpreted pieces can appeal to a wider audience, not just in those who enjoy classical music or jazz music, but to anyone whose favorite pastime may not be listening to music. If some of the newly interpreted music is played at a Piazzolla festival, the audience members, who would already be enthusiastic Piazzolla fans, may think it's not Piazzolla. I personally think Piazzolla himself is a genre. His music is not jazz. It’s not tango. It’s not classical music. So it’s hard to describe what type of music our concert will offer. I think the best description put into words would be, “Piazzolla that’s close to jazz.”


What’s so attractive about Piazzolla?


Sung: There’s something about him that makes you excited. When I play his music, I feel this excitement that I rarely feel in other scores. Moreover, with his pieces, I can express a lot of emotions using my instrument. There are not many solo pieces you can play with a contrabass but Piazzolla’s pieces are definitely one of a kind. You can maximize your emotions. 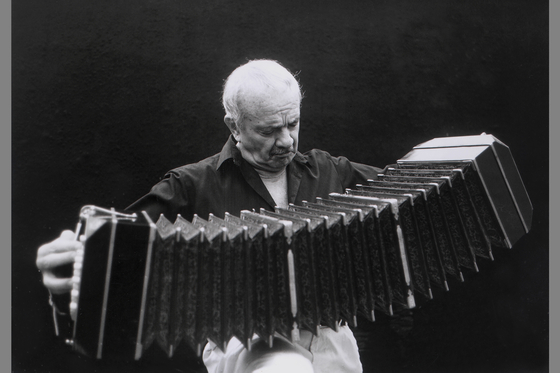 
Song: First of all, he is a great composer. I think his educational background in classical music allowed him to be so confident in writing tangos in his own style based on jazz and classical music. He created his own style. It may be easier to listen to than classical music scores written by Schumann or Beethoven but deep enough for such classical music composers to not dare to challenge him. Moreover, you never get tired of Piazzolla’s music. I’ve released three albums and performed with so many different ensembles, but I still have so much fun when I play Piazzolla. I think audience members can feel that too.


How did you feel when a young double bass player approached you to hold this unique duo concert on Piazzolla?


Song: I met Sung for the first time nearly 20 years ago when he was a lot younger. He’s now become such a great solo performer with such great technical skills. I can tell you that the rearranged pieces for double bass and cello are so technically difficult that just a common cellist and a double bassist will not be able to play them. There are a lot of high notes that the instruments aren't usually required to play. So if you are not a skilled player, it will sound terrible. I think I accepted this difficult yet exciting challenge because the other performer was Sung. I could picture putting on a great performance with a great artist to commemorate a great composer.

On the other hand, I felt somewhat lonely. The career of a classical musician really kicks off in their 60s, many people in the industry say. But it’s a pity there are not many classical musicians even around my age in Korea. I’m nearing only 50. Many active performers are all in their 20s and 30s. Most of the musicians I perform with are a lot younger than me. All the rest seem to be [...] I don’t know what they are doing. But when I go abroad, I’m the youngest.


What’s your favorite piece in the program?


Sung: “Oblivion” and “Ave Maria.” I think I have to pick two. For both pieces, there will be new arrangements. For “Oblivion,” a countertenor Park Seo-jin will be joining me on stage, while harpist Shim So-jeong will be joining me for “Ave Maria.” It’ll be a unique scene for even Piazzolla fans to see a harp to play his music. There’s also “Libertango,” which is one of the most popular pieces but we’ve done such a refreshing reinterpretation that it will sound so new.

Song: Like Sung said earlier, there are well-known Piazzolla songs and lesser-known songs. But the highlight will be all the songs performed by the two instruments in the second half. But the song that has a special place in my heart is “Adios nonino.” Piazzolla wrote it when his father had passed away and I happened to listen to it on a BBC radio while studying in Manchester. I think it was 1995 or 96. It was raining, like it always does in London and I had just heard the news that my father, who is back in Korea, is very ill. I was in deep sorrow when I heard this music coming out from the radio. I didn’t even know who Piazzolla was, but it made me cry. If you know me, you’ll understand it’s a rare occasion. So I called the radio station the next day and asked what the song was and the producer told me it was Piazzolla’s “Adios nonino.” My love for him and his music all began here, making me a Piazzolla evangelist in Korea.