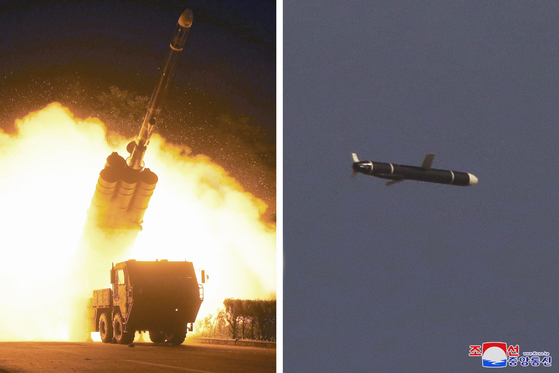 
North Korea tested new long-range cruise missiles over the weekend, its state media outlet said Monday morning as it claimed the tests were a success.

Calling the missiles "a strategic weapon of great significance," the reclusive regime's Korean Central New Agency (KCNA) said the missiles were tested on Saturday and Sunday and flew 1,500 kilometers (932 miles).


The tests come close on the heels of an overnight parade in Pyongyang on Thursday celebrating the 73rd anniversary of the country’s founding, which many observers at the time said was more toned-down and less militaristic in nature than preceding festivities, when the country often showcased its latest weapons.

However, the weekend cruise missile tests shattered the relative calm of the parade.

According to the KCNA, the new missiles travelled for 7,580 seconds along oval and pattern-8 flight orbits, hitting their intended targets within the country’s territorial waters.

The news agency's report made no secret of Pyongyang's target audience in conducting the tests — the United States and South Korea — as it described the missiles as a "core project" and "special interest" of the North's ruling Workers' Party.


“[The missiles] have special significance as it represents another effective deterrent to ensure the safety of our country and strongly suppress the anti-Republican military agitation,” the agency said.

Unlike the North’s cruise and short-range ballistic missile tests on March 21 and 25, when authorities detected the North’s tests but did not release the news for several days, both South Korean and U.S. military authorities were reportedly unaware of this past weekend’s tests before the KCNA’s report, according to a government official who spoke on Monday to the JoongAng Ilbo on the condition of anonymity.

“On this occasion, we not only failed to detect the tests before they happened, but also after,” the official said. “Both the government and military authorities are in shock over this intelligence failure."

The official added that neither South Korean nor U.S. military authorities are certain of the missiles’ trajectory or where exactly they fell into the sea.

Modern cruise missiles are harder to detect and intercept because they are often self-navigating and able to fly on extremely low-altitude trajectories compared to ballistic missiles.

Cruise missiles are also often equipped with sensors to evade interception and active radar homing seekers to guide them to their targets, greatly enhancing their precision.

However, under United Nations Security Council resolutions, North Korea is not explicitly banned from developing cruise missiles, unlike ballistic missiles.

If the North’s own reports on the tests are accurate, the cruise missiles fired over the weekend traveled at approximately 712 kilometers per hour. For comparison, modern ballistic missiles can travel up to twice the speed of sound (twice being 1,535 miles per hour) and can carry warheads with a higher payload than cruise missiles.

However, experts view the addition of cruise missiles to the North’s arsenal as a potentially lethal upgrade to its ability to neutralize South Korean defenses in the event of war.

In an interview with Voice of America (VOA) in March shortly after the North’s last cruise missile tests, Ian Williams, deputy director of the Missile Defense Project at the Center for Strategic and International Studies, said the North could use cruise missiles to attack radars, such as air defense radars and missile defense radars, thereby blinding radar-dependent missile defense equipment, and then follow up with ballistic missiles.

“It's maybe not a violation of the UN Security Council resolutions, but cruise missiles offer a very different kind of aerial threat,” Williams said. “Having that dual capability of cruise missiles and ballistic missiles complicates defenses and it gives North Korea opportunities to be a little more surgical.”

Experts say that the fact the North released reports of the tests suggests that while it did not want its show of force to pass unnoticed, it also did not want to be subjected to stiffer sanctions by violating United Nations resolutions.

Talks concerning the North’s nuclear and ballistic missile program have stalled since 2019, when North Korean leader Kim Jong-un’s summit with then-U.S. President Donald Trump ended with no agreement between the two countries and no sanctions relief for the North.

Jin Hee-gwan, a professor of unification studies at Inje University, described the North’s recent moves, chiefly the toned-down parade and the cruise missile test, as the country “using guerilla-esque tactics to reassure and counterattack its opponents without crossing any red lines.”

News of the tests come a day before South Korean, Japanese and U.S. negotiators meet in Tokyo to explore ways of resolving the nuclear stalemate with the North.

Chinese Foreign Minister Wang Yi is also scheduled to arrive in Seoul on Tuesday for talks with his counterpart, Chung Eui-yong.

Rodong Sinmun, the official newspaper of the Workers’ Party, published photos of one of the new long-range cruise missiles at the moment it was fired from transporter erector launcher, a mobile launch vehicle.

Although Kim Jong-un was not mentioned in reports as being in attendance during the tests, the KCNA said that Pak Jong-chon, secretary of the party’s central committee and a member of the Politburo, oversaw the launches.

According to the KCNA, Pak said the North “must continue to achieve results necessary to possess a deterrent to war.” The North often refers to its ever-growing arsenal of nuclear weapons and missiles as a “deterrent.”

The tests are Pyongyang’s first disclosed missile launches after the regime launched a series of cruise and tactical short-range ballistic missiles in March. The North also previously fired a cruise missile in January, only a few hours after U.S. President Joe Biden took office.