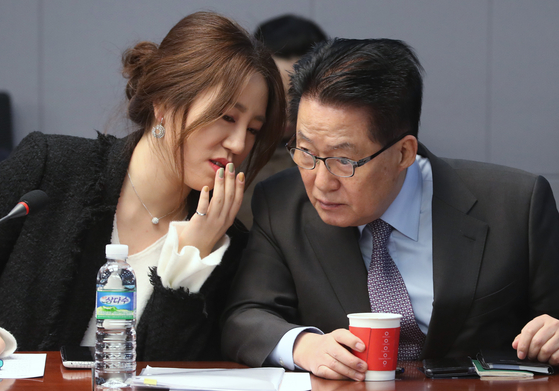 Cho Sung-eun, a former deputy chief of the election committee of the United Future Party (UFP), left, speaks to Park Jie-won, chief of the National Intelligence Service (NIS) and then head of the minor opposition People’s Party, at the National Assembly in western Seoul on Jan. 12, 2018. The main opposition People Power Party is accusing Park of backing Cho, the whistleblower in allegations that presidential contender Yoon Seok-youl meddled in the April 2020 general elections while serving as prosecutor general. [NEWS1]


The opposition People Power Party (PPP) is accusing Park Jie-won, chief of the National Intelligence Service (NIS), of conspiring with a whistleblower to derail the presidential candidacy of Yoon Seok-youl.

The whistleblower, Cho Sung-eun, claims Yoon meddled in the April 2020 general elections while serving as prosecutor general. As a result of Cho's allegations, Yoon is now under investigation by the Corruption Investigation Office for High-ranking Officials (CIO).

The PPP highlighted that Cho, a former deputy chief of the election committee of the United Future Party (UFP), has had close relations with Park and accused her of having been “coached” by the NIS chief to smear Yoon, the opposition party’s frontrunner presidential candidate. The UFP is the predecessor of the PPP.

The ruling Democratic Party (DP) riposted by comparing the allegations to “a third-rate political novel.” Cho and Park also both responded tartly to the allegations Monday.

Newsverse, an online news outlet, first reported on Sept. 2 that Son Jun-sung, a high-ranking prosecutor close to Yoon, shared drafts of criminal complaints against journalists and political figures affiliated with the ruling party with Kim Woong, a prosecutor-turned-politician who managed the general election campaign for the UFP, ahead of the general elections on April 15, 2020.

Yoon is accused of encouraging Son, who was chief of investigative information policy at the Supreme Prosecutors’ Office, to work with Kim to derail the campaigns of DP candidates by encouraging the UFP to lodge criminal complaints against pro-government figures including: Rhyu Si-min, chairman of the Roh Moo-hyun Foundation; Choe Kang-wook, a proportional representative and head of the liberal Open Democratic Party (ODP); Hwang Hui-seok, also a member of the ODP; and MBC and Newstapa reporters and staff. Son is now a senior human rights official at the Daegu High Prosecutors’ Office, while Kim is currently a first-term lawmaker for the PPP.

In an interview with SBS Sunday, whistleblower Cho said that the publishing of the Newsverse report on Sept. 2 was “not a date that the director or I had wanted or discussed,” in reference to Park, fueling the controversy over their connection. She was talking about the timing of the report, and in a previous interview with JTBC on Friday described the reporting as an “accident.”

The PPP and Yoon’s campaign is describing the situation as “Park Jie-won gate,” accusing the NIS chief and Cho of “political maneuvering” to take down the leading opposition presidential candidate. The PPP shared a past photograph of Cho and Park, when he was head of the minor opposition People’s Party, conversing with each other at the National Assembly on Jan. 12, 2018. Yoon’s campaign described Cho as Park’s “political surrogate daughter” Sunday.

Cho was reported to have met with Park at a hotel restaurant in Seoul on Aug. 11, around a month before the Newsverse report, though it is unclear what they discussed in the meeting. At the time, Cho posted on Facebook a photo of the interior or the restaurant with the comment, “Always a special time, moments of conversing with history.” Park was not mentioned in her Facebook post.

PPP head Lee Jun-seok called on Park to clarify his role during his party’s supreme council meeting Monday, adding, “If the explanation is insufficient, we will demand his resignation.”

Lee raised the suspicion that Park was “a coach of some sort” to Cho, especially taking into consideration the timing of the meeting between the two. He added that “the intelligence agency’s political intervention is something the public is most wary of.”

Cho defended her SBS remarks in radio interviews with MBC and CBS Monday, saying they were a “slip of the tongue” because she had been “astounded” by the accusations linking Park to the situation, saying she “isn’t the type to consult with or listen to others.”

In a Facebook post Sunday, Cho wrote, “I did not consider Director Park as a person to discuss the contents of the report on Yoon.”

She said that accusers “would like to cast an image of a young, inexperienced woman” to allege that “someone is behind” her actions, but said she had plenty of political experience and was responsible for her own actions.

In another Facebook post Monday, Cho apologized to Park and said, “I have nothing to say except that I am sorry for hurting someone who has a lot of love and affection, who is in charge of an important government post."

She added, “The case can no longer be buried, and the truth will be revealed,” saying that “at the end of the day, the truth of the case will be what protects me.”

“Former Prosecutor General Yoon Seok-Youl and the PPP are writing a nonsensical third-rate political novel that alleges NIS intervention over a public interest informant grabbing a meal with Park Ji-won, who has nothing to do with the truth of the incident,” DP chief Song Young-gil said at his party’s supreme council meeting Monday. “It's very typical, old-fashioned politics of attacking the messenger."

NIS chief Park rejected allegations that he was meddling in the presidential election and told Yonhap News Monday that the PPP “is grasping at straws.” He denied having any “special relations” with Cho. He said the opposition party is trying to make someone who is “not even a minor player into the lead actor.” 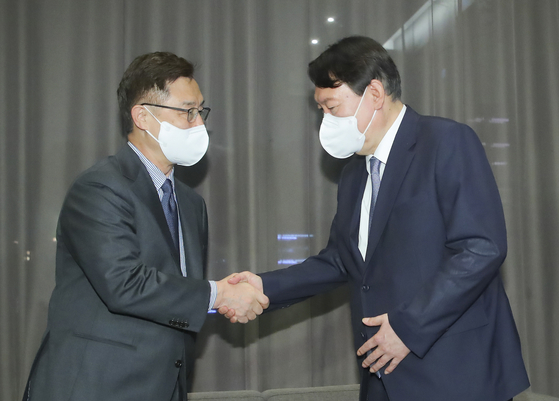 Former Prosecutor General Yoon Seok-youl, right, and Former Board of Audit and Inspection Chairman Choe Jae-hyeong, both opposition presidential contenders, hold a surprise meeting Sunday evening at a hotel in Yeouido, western Seoul, in a show of unity to discuss issues including the allegations against Yoon meddling in last year’s elections during his time as prosecutor general. [NEWS1]

The CIO launched an investigation of Yoon Friday on accusations of power abuse, disclosure of official secrets as well as violation of the personal information protection act and public official election law.

The CIO raided last Friday the offices and homes of Son and PPP Rep. Kim Woong. Cho handed over her mobile phone and other evidence to the CIO last week.

The PPP on Saturday filed a complaint against Kim Jin-wook, chief of the CIO, and CIO inspectors for allegedly conducting an illegal raid on Rep. Kim’s office and abusing power last Friday. Rep. Kim’s office has accused the CIO of searching for keywords on his computer unrelated to the case and not showing proper warrants.

The CIO on Monday attempted another raid of Kim’s office in the National Assembly after investigators failed to search it last Friday because of resistance from PPP lawmakers. The CIO said that it will consider legal action for Kim interfering with its search.

Yoon’s campaign filed a complaint with the CIO against Cho and Park for allegedly violating the public official election act and national intelligence service act Monday.