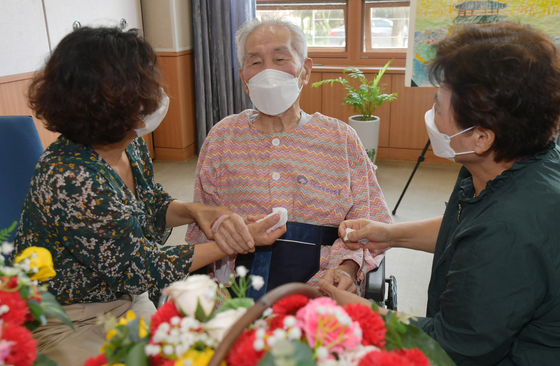 Two daughters hold hands with their father Lee Joo-hwan, 93, at a nursing home in Suwon, Gyeonggi, on Monday. Starting Monday, the government temporarily allowed patients and visitors to meet face-to-face if both are fully vaccinated — part of special virus control measures to be applied for the Chuseok holidays until Sept. 26. [NEWS1]


The Korean government said Monday it will cover all expenses for Covid-19 oral medication if such a treatment is introduced, which is expected to cost over 900,000 won ($765) per dose.

“We are waiving co-payments for the public as for now,” Son Young-rae, a senior epidemiological strategist at the Central Disaster Management Headquarters, told reporters on Monday regarding the cost of oral Covid-19 treatment.

Korea is under consultation with global pharmaceutical companies to preorder oral Covid-19 treatments in pill form, which is expected to be a game-changer as the pandemic continues.

Oral treatments developed by MSD (known as Merck & Co. in the United States and Canada), Pfizer and Roche have begun Phase 3 clinical trials overseas. MSD’s molnupiravir, in particular, is ahead of its competitors, as it is expected to seek the emergency use authorization from the U.S. Food and Drug Administration in October at the earliest.

The Korea Disease Control and Prevention Agency (KDCA) earlier announced that they have allocated 16.8 billion won ($14.3 million) of this year’s supplementary budget to purchase Covid-19 treatments for 18,000 people, and 19.4 billion won to buy enough for 20,000 people in next year’s. Altogether, the government has set aside a total of 36.2 billion won to buy 38,000 tabs, bringing the estimated price per person to around 952,600 won.

Given such a price, some raised questions on whether they are too expensive compared to other medicines.

“In Korea, the entire treatment process [for Covid-19] is borne by the state, so the people are not burdened with costs,” Son said. “If such a treatment is introduced, we will apply the same principle.”

Covid-19 has been classified as a Level 1 legal communicable disease, and the government is to cover the entire cost of treatment for such diseases, as described under the Infectious Disease Control and Prevention Act.

The costs of antiviral medications approved to treat severe Covid-19 patients in Korea — such as remdesivir by the United States' Gilead Sciences or Korean-made regdanvimab by Celltrion Healthcare — are also covered by the government.

Health authorities emphasized the need for oral Covid-19 pills, citing their efficacy compared to previous medications which cannot be done on one’s own.

“If a medication is administered through a syringe, it is difficult to be done at home and patients would have to be hospitalized,” Bae Kyung-taek, the general situation team director of the Central Disease Control Headquarters, said during a radio show last Friday.

He continued, “Oral treatments would make it possible for a patient to watch the progress of their condition at home, making the situation a lot more different.”

One more virus death was added, bringing the death toll to 2,360.

With cases staying above 1,000 for over two months, the government aims to give at least one dose of a Covid-19 vaccine to 70 percent of the country's population, or 36 million people, before the Chuseok harvest holidays, which fall on Sept. 20 to 22.

Currently, the country is giving jabs nationwide to the general public aged 18 to 49.

Health officials said Monday that they will announce a detailed vaccination plan for minors aged 12 to 17 within the month, following their announcement earlier that the country will offer vaccines to that age group in the fourth quarter.