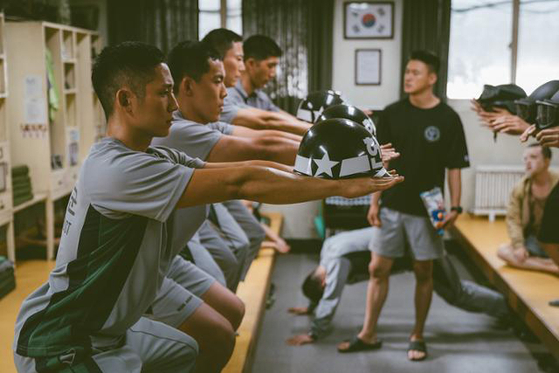 A scene from popular drama “D.P.” released on Netflix on Aug. 27. [NETFLIX]


Released on Netflix on Aug. 27, popular drama “D.P.” is a story about the deserter pursuit team casing deserters. While the well-written script and excellent acting are certainly reasons for the drama’s popularity, its success was especially boosted by the word of mouth about the realistic depiction of the military. Ready Steady Cut, a British review site, raved that it was one of the best Korean dramas this year and realistically depicts the vicious cycle of harassment.

In fact, 2014 — the drama’s setting — was a year when an exceptional amount of such incidents took place in the military. The drama features vulnerable characters suffering from bullying and unreasonable barrack culture.

Presidential candidates are adding their opinions, riding on the popularity of the drama. Gyeonggi Gov. Lee Jae-myung posted on his Facebook, “I did not serve in the military because of an industrial accident, but the harassment is not much different from what I experienced every day in the factory decades ago.” Rep. Hong Joon-pyo, a candidate from the opposition party, also wrote on Facebook, “It’s a fiction, but I cannot say that harassment is no longer happening in the military. I pledge to change the enlistment system and will consider a volunteer system to make our military stronger.”

The military is not very happy with the drama that is quite different from other programs that emphasize strength and brotherhood like “Steel Troops” and “Real Men.” On a question regarding “D.P.” at the regular briefing on Sept. 6, a Defense Ministry spokesman said that the barrack culture is changing and accidents cannot be covered up because soldiers are allowed to use smartphones. He emphasized that the drama is different from reality, expressing unpleasantness in a roundabout way.

But the very next day, the Military Human Rights Center held a press conference on the death of Private Jeong on the Gang Gam-chan destroyer. He was beaten, verbally harassed, and bullied from seniors on the warship and took his own life at home during vacation in June. So, did the military change?

Kim Bo-tong, the original author of “D.P.” wrote on social media about the background of the drama. “I made this piece to fight the ghost of oblivion that things have gotten better now,” he said. I recommend military insiders watch ‘D.P.’ through until the final episode.