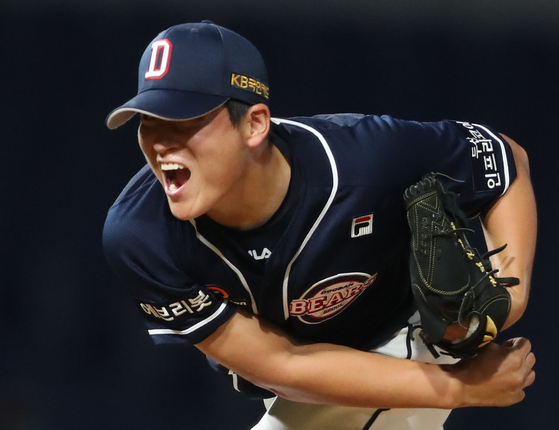 Doosan's Kwon Hwi throws a pitch during the seventh inning of a game against the NC Dinos in Changwon, South Gyeongsang on Friday. [YONHAP]


The KT Wiz hold on to a comfortable lead at the top of the KBO with just a month left to play, but further down the table the race to the postseason is starting to heat up.

There were seven games scheduled over the last week — three two-game series with a double-header on Sunday — but the majority of teams only played six games due to rain on Tuesday.

KT extended their lead by half a game, but only picked up two wins — both against the fifth-place SSG Landers on Sunday — with a loss to the second-place Samsung Lions on Thursday and an unusual three ties — 5-5 against the ninth-place Kia Tigers, 2-2 against the Lions and 2-2 against the Landers.

The Lions had an equally bizarre week, losing two games to the eighth-place Lotte Giants, beating both the Wiz and the 10th-place Eagles, and picking up three ties of their own, adding two ties wit the Eagles — 3-3 and 6-6 — to the one with the Wiz.

The LG Twins slipped down to third, winning just two of their six games. The Twins started the week off with a 5-3 loss to the Landers and then picked up two wins against the Eagles — 8-1, 2-0 — before facing their old rivals the Doosan Bears over the weekend. The Twins held out for a 5-5 tie on Saturday before dropping both Sunday games — 8-5, 8-5.

The fourth-place Kiwoom Heroes also fell foul to the Bears to start off their week, losing 7-1 on Wednesday. The west Seoul club rallied later in the week to pick up two wins each against the Tigers and the Giants with a single loss to round off the week.

The NC Dinos and the Landers are level-pegging in fifth, but SSG are well ahead in terms of games played. With only the top five teams advancing to the postseason — and only the top four doing so without having to battle through the severely weighted wildcard game — the competition is heating up with just four weeks left to play. Just two and a half games separate the Heroes in fourth and the Dinos and Landers in fifth.

But just behind the Dinos and Landers in seventh place lie the Bears. The perennial postseason favorites have had a rough season, but suddenly seemed to have kicked into high gear as the playoffs approach.

The Seoul club hasn't lost a game in 10 days, with six wins and a tie across their last seven fixtures. That puts Doosan just half a game behind NC and SSG and three games behind the Heroes, and Doosan has only played 102 games, the same as NC but considerably fewer than SSG's 107 and the Heroes' 108.

Further down the table, the Giants still have an outside chance at reaching the postseason, with three and a half games separating them from fifth place. The Tigers and the Eagles trail in ninth and tenth with very little chance of getting back into the competition.

The Samsung Lion's Mike Montgomery throws a rosin bag at the umpire during a game against the KT Wiz in Daegu on Friday. [JOONGANG SUNDAY]


There could be further trouble brewing for the second-place Lions, after pitcher Mike Montgomery made a run at and threw a rosin bag at the home-plate umpire after growing angry over a 12-second pitch clock violation. Montgomery was dragged off the field by his teammates, angrily ripping off his jersey and throwing it on the pitch.

The KBO's disciplinary committee were set to meet on Monday to rule on a punishment for Montgomery, with no result announced as of press time. The ruling could well be a 30-game suspension, essentially taking away a starter for the rest of the regular season.

Going into this week, the Wiz will take on the Bears at Jamsil, southern Seoul, the Eagles will head to Incheon to play the Landers, the Twins will try their luck against the Lions in Daegu, the Heroes and the Dinos will face off in Changwon and the Giants will visit the Tigers in Daegu.